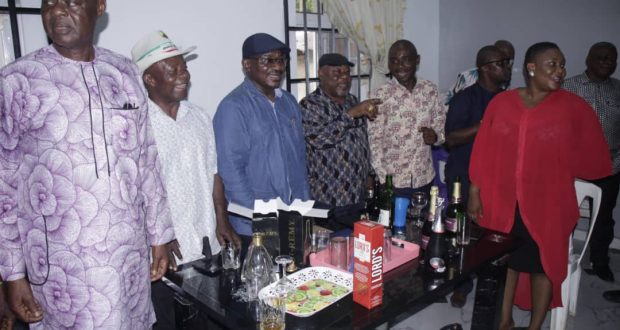 The Akwa Ibom State Commissioner for Health, Prof. Augustine Vincent Umoh has described Gov. Udom Gabriel Emmanuel as a leader of tested ability, sound judgement and keen perception whose fine and adorable character and leadership qualities have stood him out as one of the best leaders of our time.

Prof. Umoh whose well tailored and measure of words rekindled strong hope of Ikono taking its pride of place in the administration of Gov. Udom Emmanuel in a no distance time made the assertion when he played host to PDP Ward Exco and stakeholders of Ediene two, Ward eleven at his Ibianang country home, Ikono LGA. Prof. Augustine Umoh further hinted that Gov. Udom Emmanuel is a listening leader with sufficient passion to turn around the fortune of his people. In his words, “I have never seen a leader like Gov. Udom Emmanuel before, you may not believe it, he is one leader who listens to the slightest complain or appeal of his people and will make sufficient efforts to attend to such complaints or appeals”. Prof. Umoh said.

The former chairman of the State branch of the Nigerian Medical Association (NMA) used the occasion to thank His Excellency, Mr. Udom Emmanuel for finding him worthy of appointment as the AKS Commissioner for Health without any prejudice. He promised to reciprocate the gesture by working in tandem with the ideology and principles of Gov. Emmanuel to ensure the success of the completion agenda of his administration. He urged the people to be united as a party and people to achieve common goals stressing that he will always be available for the people whenever his services are needed.

On his part, former National Assembly member and an illustrous son of the area, Senator Aloysius Etok described the appointment of Prof. Augustine Vincen Umoh as Commissioner by Gov. Udom Emmanuel as a profound reference to God’s intervention in the struggle and yearning of the people of the area. Senator Etok maintained that the appointment of Prof. Augustine Umoh is a partial reward of the sincere commitment and sacrifices invested in the political struggle of the people of Ward eleven in particular and Ikono in general.

The seasoned and highly experienced legislator opined that for Prof. Umoh to succeed at his duty, the people of the area must support and cooperate with him. These, according to him, are the sacred sacrifices his people have to make. Senator Aloysius Etok who is widely described as political Head of table in the area, used the event to thank Gov. Udom Emmanuel for appointing Prof. Augustine Vincent Umoh as a member of his Executive Council as well as making him the arrow head of government in Ikono LGA. He paid glowing tributes to Gov. Emmanuel and reassured the people of Gov. Emmanuel’s readiness to reconstruct the Uyo Afaha Nkan, Urua Naira/Nkwot roads. Senator Etok ended his speech by describing His Excellency, Mr. Udom Emmanuel as a Governor and leader whose enviable record has earned him a place of great distinction.