Breaking News
Home / Breaking News / GOV. UDOM EMMANUEL: A Scammer in the Eyes of the Opposition 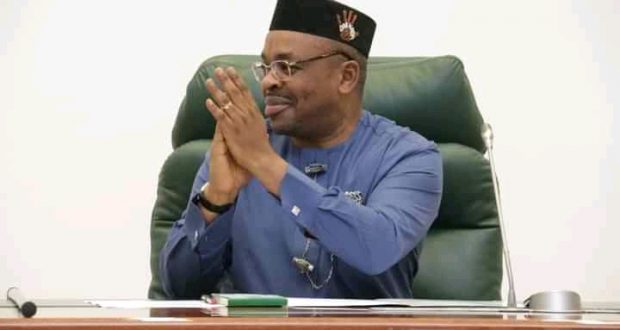 GOV. UDOM EMMANUEL: A Scammer in the Eyes of the Opposition

May 29, 2015 was the date. The then Akwa Ibom International Stadium, Uyo was the venue. Change of mantle of leadership was the event. Udom Emmanuel was the big masquerade of the day.

The journey all began on the above date when he (Mr. Udom Emmanuel) took the Oath of Office as Governor of Akwa Ibom State.

Immediately after the swearing-in, His Excellency, Mr. Udom Emmanuel mounted the podium to deliver his address. After giving thanks to God, he performed his first duty which was the renaming of then Akwa Ibom International Stadium after his immediate predecessor, Chief Godswill Akpabio. Consequently, the stadium is today known as Godswill Akpabio International Stadium.

The Governor in his speech, hinged the core mandate of his administration on INDUSTRIALIZATION. He promised the people of Akwa Ibom State total industrial revolution in order to make the State economically viable and to be a destination of choice for investors.

Therefore, my major focus in this write up is on industrialization because, it is the pivot of the administration of His Excellency.

Akwa Ibom State has been a civil service state. Majority of the citizens survive from salaries they earn as civil servants. Before now, there were no functional industries to drive and diversify the economy, boost the IGR of the state and offer alternative source of income for the masses.

The few industries we had, such as the Paper Mill in Itu, the ALSCON in Ikot Abasi, belonging to the Federal Government and the state owned Peacock Paint in Etinan were all dead and dysfunctional, and there was no effort by any administration both at the federal and state levels to revive these industries.

Ideally, it is a known fact that before any successful industrial revolution can occur, certain things that are considered as catalysts must be put in place to drive it. These include good transportation network (road, air and water), Power, Security, Enabling Business Environment, Government/Political Will and Support etc.

As one who has been in the private sector for years and understood the modus operandi of achieving a desired and workable economy, Gov. Emmanuel immediately swung into action on his industrialization drive.

Again in 2019, during his swearing-in for second term in office, he reiterated his commitment to the industrialization of the state. He made real his promise by sustaining the legacy of his predecessor in providing road infrastructure to open up the state on land. Having known also that if you want to connect internationally, you must open up the air transport system, he didn’t waste time in investing so much in the aviation sector, which brought about the creation of the Ministry of Aviation for the first time in history of the state.

This effort gave birth to Ibom Air, the state owned airline to complement the industrialization drive of his administration. Ibom Air started with about three aircrafts, flying Uyo, Abuja and Lagos, but today, within two years, Ibom Air has seven aircrafts in its fleet flying several routes such as Uyo, Lagos, Abuja, Calabar, Enugu as efforts are ongoing to add several other local routes and to start flights to some African countries.

He did not just stop at establishing an airline for the state, but he went further to invest more in the development of the state owned airport by building a standard terminal, second runway and MRO facility, which are all ongoing and have reached different advanced stages.

The deep seaport is another area we should give credit to the Governor. The efforts of the previous administrations have paid off with Governor Emmanuel’s success in obtaining license for the project. This is one project that will overhaul the economic fortunes of the state. I am hopeful that the ongoing engagements and negotiations with investors over the Ibom Deep Seaport project will yield dividends sooner than later.

As government is not solely a business entity, the Governor has through the Public Private Partnership-PPP and Foreign Direct Investment-FDI Initiative attracted several industries to the state. However, most of these industries are owned by the state while some are through the PPP and FDI with government providing the enabling environment and the necessary infrastructures.

It is evident to note that as at today, several industries can be pointed at in the state, as some are completed and fully operational while some are at different stages of completion.

But in all of these that the Governor has done, the opposition still throws punches at the Governor on every step he takes and sees him as a SCAMMER.

Why?
Because, they believe all these cannot be possible and to them, it is still like a dream. But to their greatest disappointment, the Governor is still going about commissioning projects almost on monthly basis.

All these and many more are made possible through the love and passion he has for his people. He is always very ready to secure a brighter future for the generations of Akwa Ibomites unborn.

May God continue to strengthen His Excellency to unleash aggressively more development on the state.