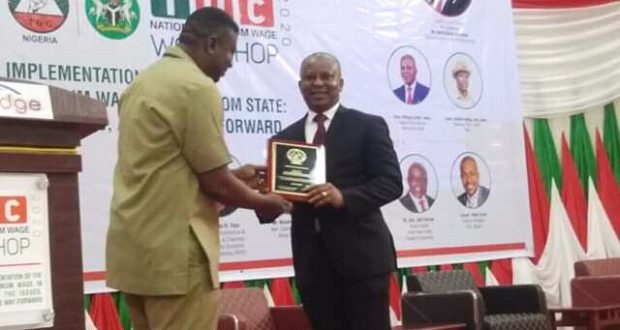 The Akwa Ibom state Governor, Deacon Udom Gabriel Emmanuel have been conferred with Award of excellence by the leadership of Trade Union Congress Akwa Ibom State branch in recognition of his leadership strides as demonstrated in the implementation of of the new National Minimum Wage.

Addressing participants and members of the union at watbridge hotels and suites, venue of the workshop, Governor Emmanuel assured leadership of the Union that his administration will continue to give workers welfare top priority in the state, said Akwa Ibom is the first state to have inaugurated the committee on the implementation of the new wage.

Speaking through the Head of service, Elder Effiong Essien, the governor explained that the payment was done inline with the federal percentage of consequential increment with arrears and charged workers not to relent efforts in contributing towards the realization of government policies as well as reciprocate government good intentions on workers, while commending the leadership of Trade Union Congress (TUC) for their maturity in making demands, their understanding and cooperation which have ensured the enduring industrial harmony in the state.

On his part, the Head of Service, Akwa Ibom state, Elder Effiong Essien in his address said the workshop is apt and timely, thanked leadership of TUC for hosting the workshop, maintained that the seminar will X-ray the impact of the new wage and bring about increase in productivity by workers.

Essien noted that, the workshop is a welcome development considering the process of implementation of the minimum wage, he applauded all resources person for offering themselves to share their thoughts and experiences with Akwa Ibom State workers.

Earlier in his address, Chairman of Trade Union Congress of Nigeria, Akwa Ibom state council, comrade Dominic Abang said the theme : Towards The implementation of the New National Minimum Wage in Akwa Ibom State; the issues, Implications and the way forward is timely and unique as it aimed at providing workers with in depth understanding of the macro and social economic implications of the implementation of the new wage, and also analysis of some emerging issues related to wage adjustment and proffer practical recommendation for a cordial and sustainable working environment.

“Our commitment and patriotic zeal as a union and as people to sustain our partnership with the state government in building the state economy. Over the years people tend to develop false impression that the essence of labour Union is to fight government or disrupt its operations, we are changing such narrative by re-defining the role of labour in our contemporary society. Government and unions should be seen as partners in progress as long as both pursued Noble objectives of not only promoting the welfare of the citizens but improving the national and sub National economy “.

The TUC boss stressed that, the outcome of the workshop will not only benefit Akwa Ibom workers but others State that are still on the negotiation table and provide a pathway to sustainable industrial harmony with high productivity. He thanked Governor Udom Emmanuel, head of service and all the resource person for their tremendous contributions, commitment and sacrifices in making the workshop a reality.

Giving an insight to the theme, former Vice Chancellor of the University of Uyo, a renowned professor of Economics and public policy, who doubles as Chairman, foundation for Economic Research and Training (FERT) Prof. Akpan Ekpo, explained that the major reason for industrial disharmony is government inability to provide workers with enabling environment as well as basic social amenities for their families, he noted that when everything is functional, workers will comfortably pay their bills and rendered their service effectively.