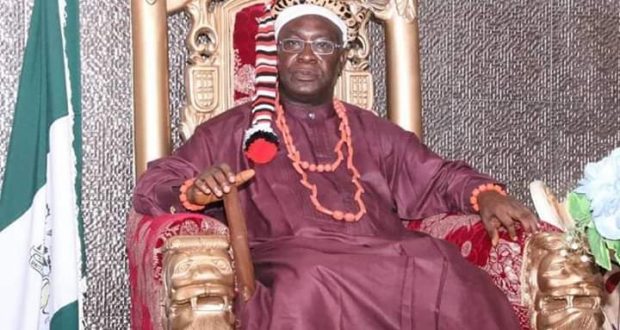 The Akwa Ibom State governor, Mr. UDOM EMMANUEL has sworn into office the 30th chairman for the State Council of Chiefs.
Mr. EMMANUEL, performed the swearing-in of the new chairman, Akwa Ibom State Council of Chiefs, in the person of His Eminence, Ntenyin SOLOMON DANIEL ETUK, who is also the Oku Ibom Ibibio and Paramount Ruler of Nsit Ubium local government area as part of activities to mark the 32nd anniversary of the state’s creation.
Ntenyin SOLOMON ETUK is succeeding the late Paramount Ruler of Ini, Ntoeng UDO EFFIONG AKPAN. The governor also swore-in seven new paramount rulers at an event held at the Banquet Hall, Uyo.
The governor acknowledged the contributions by the royal fathers to peace and order in the state. He however harped on the need for selection of Paramount Rulers who can represent the state at anytime.
The governor further advised that in a situation where a paramount ruler is indisposed or at the departure of any paramount ruler, a clear cut procedure was expected for the emergence of new rulers without undue delays.
Mr. EMMANUEL assured the royal fathers that his administration would continue to carry out obligations of their welfare.
Earlier in his remarks, the commissioner for local government and chieftaincy affairs, Mr UDO EKPENYONG, said the recognition and subsequent swearing-in of the royal fathers was in compliance with the traditional rulers’ law of Akwa Ibom, indicating that Ntenyin ETUK emerged through a fair-minded process by the established traditions.
EKPENYONG explained that there exists a strong and cordial relationship between the state government and the traditional rulers, describing the swearing-in as a commitment to strengthening the traditional institution to meet expectations in the state.
In his inaugural address, the new Chairman, Ntenyin ETUK expressed delight for the honour done him as the 30th chairman of the State Council of Chiefs, describing the occasion as auspicious at the 32nd anniversary of the state.
Ntenyin ETUK stated that the appointment was a clarion call to serve the people of the state at all tiers.
At the ceremony, the royal fathers sworn-in as paramount rulers were: the paramount ruler of Abak, Akuku SAVIOUR SYLVESTER UDOFIA; the paramount ruler of Nsit Atai, Edidem PETER OKON EFFIONG and the paramount ruler of Ini, Edidem ETIM EDWARD AKPAN.
Others were the paramount ruler of Mbo, Ogwong OKON ASUQUO ABANG; the paramount ruler of Oruk Anam, Okuku (Engr.) JOHNSON JOHNNY OBOSI; the paramount ruler of Ukanafun, Akuku (Engr.) AMOS DANIEL AKPAN; and the paramount ruler of Uruan, Edidem COSMAS BASSEY NKANGA.