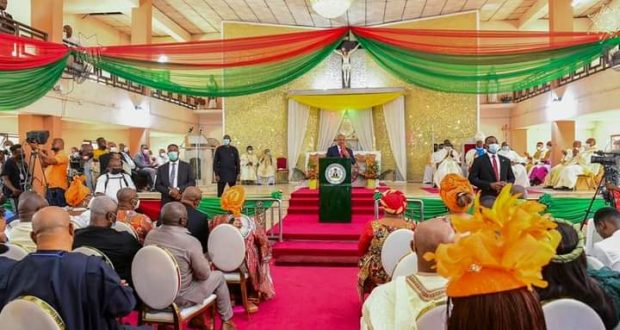 Governor Emmanuel who led top government functionaries on Sunday at a Special Interdenominational Solemn Assembly to rededicate the state to God and usher in year 2022, at Sacred Heart Catholic Church, Uyo, called on Akwa Ibom to thank God for sustaining the state through challenges in recent years.

The governor who acknowledged the peace and development witnessed over the years in state, stated that the development attained in the state had been a collective contributions of illustrious sons of the state, assuring that in line with the theme of 2022, ‘There Shall be a Performance’ God will prosper the state in the new year.

“Every year we gather like this to seek the face of God, this State as we all know belongs to God that is why I refer to Akwa Ibom in my speeches as God’s own piece of real estate.

“God is the great and mighty warrior who has never disappointed us as a state over the years through His love mercy and guidance which is why we have come here collectively as a people and as a state to thank Him for allowing us see the year 2022, for what He has done and what He will continue to do”

‘’What has happened in this state is what I call imprimatur of God’s invisible hands; from the peace and development to the rising profile of our state as a destination of choice for investors, conferences; to the sectoral achievements we have recorded which has earned us the national acclaim Nigeria’s best kept secret. There is no doubt that God is doing a great and mighty thing in the state’’

The Chief Executive of the State assured Akwa Ibom people of his commitment in delivering on his promises, stating that with some challenges earlier witnessed from climate to other unforeseen issues all developmental projects in the state will be completed.

‘’The year 2021 was a difficult one from the harvests of deaths that we had to the manifestation of what scientists call climate change.

“People will agree with me that we have never seen such a rainfall like that of last year and the attendant delay of most of our road construction and other infrastructural expansion.

“We thank God that in spite of these factors coupled with the Covid-19, we have remained totally focus in fulfilling our governance obligations to the best of the resources available’’

He however called on Akwa Ibom people to take responsibility towards building the state corroborating the homily by Rev. Fr Justin Udomah who urged the people to be citizens thinking about the progress and growth of another person.

The governor used the occasion to cautioned persons aspiring for political office in 2023 not to heat up the polity, rather should go about it peacefully in order not to disrupt the peace and development in the state, adding that God in due time will reveal his successor

‘’This year all those who seek political office in 2023 will seek in peace and people should also realize that even if there up to 100 people there is only one seat and one man will sit and as the homily said no matter what we do it is only the Lord’s council that shall stand’’.

The governor took the only Bible reading from Isaiah 60: 1-6.

Mr Emmanuel also led in Offertory Procession alongside Deputy Governor, Speaker Akwa Ibom House of Assembly and Secretary to the State Government.
Prayers of rededication were made to God on behalf the State.

Delivering a homily on the theme of the event, “There Shall be a Performance”, culled from Luke 1:45, with reference to Isaiah 60:1-6, the Very Rev. Father Justine Udoma said it was high time Akwa Ibom people arose to the shining that God had purposed for them.

The Catholic Priest, stressing that no one can stop God’s purpose from coming to fruition, admonished that what every Akwa Ibomite from all walks of life ought to do is to believe, and work together, irrespective of differences, towards the performance of his promises, lest anyone be cut off the bounty of God’s blessing like the king’s officer (2Kings 7) who doubted the word of the Lord in Samaria.

Previous: Rev Ime Ekam at three score and ten: A life of service to God and justice to man
Next: Housing: FG rates Novone Dream Estate High, Says Partnership will be Sustain