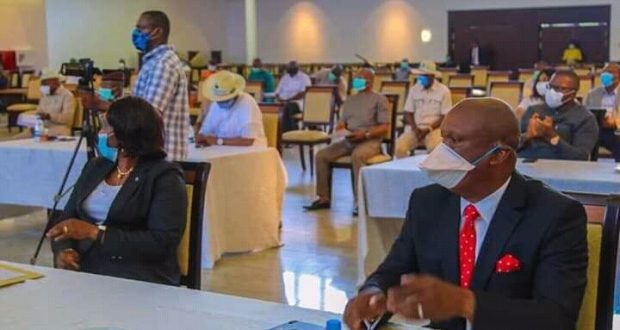 “GOV EMMANUEL IS THINKING AHEAD OF THE PEOPLE” —-EPHRAIM INYANG-EYEN

Following the timely constitution and subsequent inauguration of the much-applauded 20-man Post Covid-19 Economic Reconstruction Committee by Governor Udom Emmanuel, the Akwa Ibom State Commissioner for Works, Akparawa Ephraim Inyang-Eyen, says the governor is thinking ahead of the people for the overall interest of the State.

The Commissioner gave the assertion on Friday, May 1, while fielding questions from newsmen shortly after the committee’s inauguration at the Government House Banquet Hall, Uyo.
Akparawa Inyang-Eyen said the global scenario having been altered and changed by the novel covid-19 pandemic, our people ways of life has to be certainly overhauled hence, the need to restrategized.

Hear him, ” The way we were doing things before covid-19 and the way we will live after covid-19 is going to be completely different and as a result of the impending attitudinal change, a committee of this nature is both imperative, timely, and necessary.”

The Akwa Ibom born road and bridge builder said what the governor has done is simply kicking up the key pillars that sustains the State.

He listed the key pillars to include infrastructure, Agriculture, trade and investment, finance and economic knowhow which will engender massive participation of our people in the private sector.

Akparawa Inyang-Eyen praised the State helmsman for carefully selecting members of the committee, describing them as men and women with capacity and the very best of Akwa Ibom people in the private sector, saying he is impressed.
He stressed the importance of the committee as one that will reorientate our mindsets.

” If you have made up your mind that you cannot get a thing done, no matter the pressure, you won’t do it. But when your mindset is, that by the grace of God, you’ll do it, you can always do it.”
He harped on the timeliness of the Economic Reconstruction Committee, saying it will greatly help our people after covid-19.

On why he was anoited to be a member of the committee, the mastercraftsman attributed it to God’s grace and his portfolio as the custodian of a Ministry which oversees infrastructure in the State.

He emphasized that one could not talk about reconstruction without talking about infrastructure saying, his colleagues in the Ministries of Agriculture, Trade and investments, Finance, Economic Development and Ibom Deep Seaport were equally so considered because of their portfolios.
He re-assured that the 300-bed Isolation Center at the General Hospital Ituk Mbang will be ready soon, promising it will be the best in the country.

Inyang-Eyen lauded the forsights of Governor Emmanuel for building a permanent center which will be useful after covid-19 and in the years to come .

The post covid-19 Economic Reconstruction team is headed by Professor Akpan Hogan Ekpo, a former Vice Chancellor of the University of Uyo while Professor Emmanuel Onwioduokit, a former Commissioner for Economic Development and Head of the Department of Economics, University of Uyo, is the Secretary.