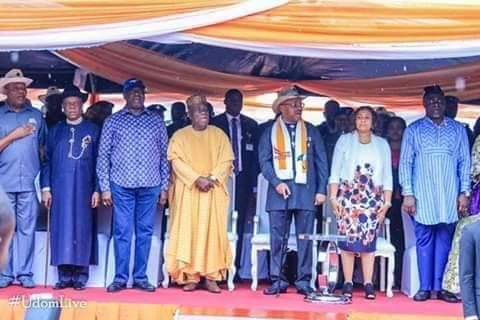 Governor Udom Emmanuel has approved the recruitment of 25 additional doctors and consultants as well as employment of hundred new nurses into the Akwa Ibom state public health sector.
Also, Union Medicals in North Carolina, United States has been contracted to commence training of medical workers in the state in the third week of August this year, in order to meet the quality healthcare needs of the people of the state. The Governor said these in Iquita, Oron, Wednesday, during the commissioning of the newly remodeled and re-equipped and digitalized General Hospital in the area.
Stressing the imperatives of affordable, accessible and available healthcare delivery to the people, the Governor warned that those who feel it is better to go for treatment abroad could be disappointed once faced with an emergency situation that requires urgent medical attention in a matter of ten or fifteen minutes timeframe.
The governor who decried the sorry state he met the Iquita hospital upon assumption of office, said the modern facilities in place can easily pass the remodeled medical center for a teaching hospital elsewhere. He charged the staff and management of the hospital to ensure strict maintenance and security of the facilities.
“I have just told some youths while coming here that it is unfortunate the roads that we constructed three years ago, if you see those roads, the gutters are filled with all manners of debris, halting the flow of rain water.
Apparently referring to the complaints of flood in some places in the state, the Governor said, “it is not the Governor that will come and de-silt those gutters, it is the chairman who has to lead the youths and go round every last Saturday of the month to clean those gutters”
He maintained that his duty is to construct, while maintenance must be a shared responsibility.
“This project just like all other projects in the state have been executed by the PDP-led administration, but once we put up the facility, it is for everybody. There is no political party here, even non Nigerians can use the hospital”, the Governor assured.
As at today, we have brought in 36 containers of medical containers and our target is to bring in 50. The other 14,” he assured, would be arriving in a short while.
Setting the tone, the Chairman of the Hospital Management Board, Dr. David Udoumoh, described the transformation in Iquita as a holistic one, saying the hospital which is one of the three reference hospitals in the state, is now fully digitalized to take care of the challenges of manual records and physical movement of documents.
He said that the hospital established in 1941 had long gone into a sorry state that, “coming into this facility became like a signature that you are going to die.”
The medical community in the State, according to Dr. Udoumoh, was happy with the vision of the Governor who reconstructed, remodeled and re-equipped the hospital.
He thanked the contractors for working according to specification, adding that the heads in the state health sector will continue to work with the Governor in ensuring that he achieves his vision of revamping all the hospitals in the state. Welcoming the Governor, the Paramount Ruler of Oron, Offong Odiong Akan, said his people are very pleased with the Governor for all he is doing to make their lives better.
“I remember when I was in school, I had fracture and was rushed to this hospital in Oron, but there were no facility and no doctor to treat me, I was taken to the General Hospital in Ituk Mbang where I was treated.
“But Today this is a brand new hospital for Oron people and we are happily praying that God will bless you. This project will remain a monument in your honour forever”, Akan prayed.
Also speaking, the Senator Akon Eyakenyi who represents Akwa Ibom South in the Senate said the Governor has written history in Gold for Oron people, by making the area his first port of call for project commissioning since his resumption for a second term less than two months ago. “Your Excellency, Oron was one of the first local government areas you visited when you were first elected in 2015 and there you saw what the Oron people were passing through as it relates to roads construction, and you stood and made a statement and in few months we saw what you did. May the Lord bless you.”
She commended the Governor for his contract award for a Atabong road project in Okobo as well as other developments he is bringing to the Oro people, and added that the remodeled hospital in Oron is located in her own village, Iquita.
Others who expressed their goodwill at the event were the Chairman of Oron, the House of Assembly member for the area as well as the Chief Medical Consultant of the hospital.
PRESS UNIT,
GOVERNMENT HOUSE, UYO
AKWA IBOM STATE
10/7//19
2019-07-10
dozzier