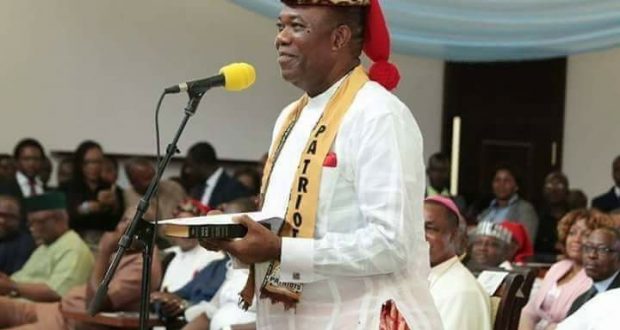 In what many consider as masterstroke, Governor Udom Emmanuel on Monday broke a 20 year jinx by appointing a foremost telecommunications genius, Dr. Emmanuel Ekuwem as the new Secretary to the State Government (SSG).
Dr. Ekuwem hails from Ofi-Uda in Mbo Local Government Area of the Oro Nation.  It can be recalled that since the creation of Akwa Ibom State thirty years ago, only one Oro Nation man, Chief Okokon Antigha had served as the Secretary to the State Government. Chief Antigha served from 1996 to 1998.
“We are elated beyond words that Oro nation has every cause to be happy and this is a sign of great and wonderful thing to come from the Udom Emmanuel led administration. The office of the SSG is the engine room of any administration, to invest this huge responsibility to an Oro son, we are indeed grateful to the Governor Udom Emmanuel and we pledge our total solidarity and support to the governor and his administration”,  a source who wished not to be known had enthused.
Similarly, Akon Eyakenyi, former Minister of Lands and housing, Dr Okwong Essien Udo, Chief Jerry Okpo have all echoed the same sentiment. “We are very pleased with Governor Udom Emmanuel for this honour he has done us. We pledge our cooperation and loyalty to his Government. The governor indeed is practising politics of inclusion and we are very happy”.
Across the state, the Governor was also praised for ensuring that all tribes and entities are well represented in his administration.
2018-01-15
dozzier