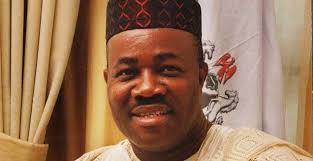 Godswill Akpabio: His symbol and cymbal

Though the rubric above does not in any way portray the name of the Immediate Past Deputy Governor, Her Honour, Noble Lady Valerie Ebe, its content, as concocted by one Akan Okokon from Onna LGA, grossly attempt to depict such respectful name in a misleadingly susurrate.
In the light of the above, I write to first and foremost debunk the fictitious tittle-tattle as humped by the starving attention seekers, secondly sanitize the minds of the people away from such flippant repugnant of slouchy psyche, and on a very sacrosanct strain, warn the investors of chaos to desist from using Her Honors name in the practicing or brandishing of their vitriolic craft.
I know it’s banal that in a face of fatal war, it’s either the weaker opponent, in a an attempt to cry out for an extrication, consciously or subconsciously mentions names that are not in any way related to the feud; or, possibly, the sarcastic crowd of spectators, derisively trying to make the best of untenanted gains and caricatures of the battle, resort to unnecessarily attempt to magnify and maneuver the scene by dragging other big names around into the delusive picture.
Well, if there were to be collective real ti1me and progressive pickings for us as a people from these shady businesses, I would gladly support and even propose qfor qqmore and better ways to go about them. But my concern in form of a question is “What is there to gain in fomenting illusive stories just to a deserve to be meted with such obnoxious drench? Why is Valerie Ebe brought into the scene?
When giving a sixth sense to the above queries, I came in terms with the fact that it is either some bogusly brainless entities with over sized shoulder paths, parading themselves as advisers, having seen the product of their ineptitude, assay to drag respectable names such as that of Her Honor to their concocted quack mire, or maybe there’s a particular sect that is aiming at making their “best” out of the illicit trade of political flaming and hurly-burly incitement. Yes, it is overly conspicuous that the contemporary political advisers don’t know the essence of their jobs, that’s why disgusting propaganda is emanating from their terrain unabated. Even in their obvious quackery, these folks still have the hardihood to needlessly and excessively heat up the polity to explosion.
I unequivocally state here that there was no such meeting as carried by either the said banner headline or its riders. There was never a point in time when the Immediate Past Deputy Governor was either through a verbal or printed media invited to or attended a meeting of such genre alongside the parties mentioned in the fake news article. And to further promulgate the shallowness of the article’s rationality, I want to make it known to the public that Her Honour, Noble Lady Valerie Ebe has been out of the country for the past two weeks. For any person or group to put it to the public that she led a team to solicit to Governor Udom Emmanuel’s pardon on behalf of the Immediate Past Governor, Senator Godswill Akpabio, is a way of humiliating the sensibility of an average Akwa Ibom person who as at now is highly politically sensitive and informed. Akwa Ibom people are well-versed with the truth that Senator Godswill Akpabio does not need plenty of words to speak for self defense in any fora. With these denuding realities, someone could readily see no point of reconciliation between these pieces of hoax as shabbily tailored by the woe mongers and the actual facts.
I therefore urge the general public to discountenance the purported ills of a news article and rather see such as byproducts of insensitive advises who could not decipher between their official responsibilities and selfish interests. Such news is nothing but sardonic fumes from the desperate political chimney. I also want to use this medium in urging the self acclaimed political gladiators to, instead of making their selfish gains out of the poor and unemployed youths in a way of initiating them into the fast growing mudslinging, false reporting and propaganda sector; choose a more honourable means of discharging their duties as these will serve as good example to those they must, as a matter of time, exit the stage for.
Finally, I warn that those indulging in this fiendish sham should have an immediate u-turn and learn to give respect to whom respect is due and honour to whom honour is due. The earlier we start recognizing the fact that we cannot leave above the rungs of the respect we ascribe to those that are ahead of us, the greater the strides we will record.
Long live Akwa Ibom State !
2018-01-22
dozzier