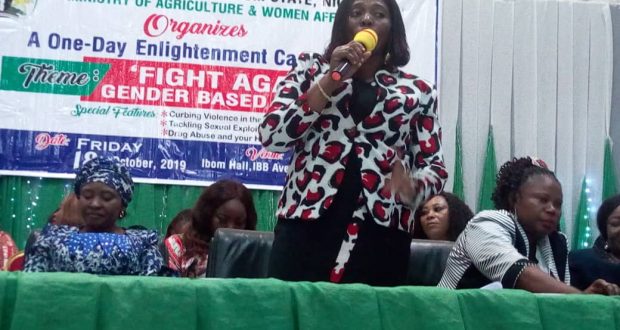 The move to curb the menace of gender based violence especially among women and girls has been stressed as a collective effort of all and sundry in the society and not only government’s responsibility.
This was the focal point of discussion at the one day enlightenment campaign organized by the Ministry of Women Affairs with the theme ‘’Fight Against Gender Based Violence’’ in Ibom hall, Uyo on Friday.

Speaking at the event, the Commissioner for Agriculture and Women Affairs, Dr. Glory Edet explained that the issue of GBV in the society cannot be over-flocked as it has eaten deep into the fabrics of the state and sweeping like a tsunami if not properly addressed.
According to her, the aim of the enlightenment campaign was to create awareness on GBV issues so that the society at large can come to the full glare of the harm caused by GBV on women and girls; condemn corporately and denounce such inhumane act in totality in public.

Dr. Edet explained that GBV is ‘’any act that is perpetrated against a person’s will and is based on gender norms and unequal power relationship. It comprises threats of violence and coercion. It can be physical, emotional, psychological or sexual in nature, and can take the form of a denial of resources or access to services. It inflicts harms on women, girls, men and boys.’’

The Women Affairs Commissioner disclosed that her ministry in partnership with NGOs, civil right society, Feyrep and FIDA is working in tandem to ensure that GBV cases are reduced to the barest minimum while pushing for a violent free society. She added that her ministry frowns at corrupt practices of security agencies who release GBV offenders without charging them to court for prosecution.

Presenting a paper on ‘’Curbing Violence in the Society’’ Mrs Grace Larry Ekanem explained that GBV or violence against women and girls are a global phenomenon that affects 1 in 3 women in their lifetime. She said the ‘’issue is not only devastating for survivors of violence and their families but also entails significant social and economic cost.’’

Dr. Edet revealed that Akwa Ibom State government have put stringent measures on ground to curb the deadly menace of GBV in the state, stressing that the ministry of Women Affairs in 2008 set up a Gender Based Prevention and Response Centre with a toll free number so victims of GBV cases can call in to report cases of GBV when the need arises.
She reiterated that the administration of Governor Udom Emmanuel pushes for zero tolerance in cultism and violence in the state, announcing that over fifteen judgments on GBV related cases have been secured in court and offenders serving different jail terms in prison.

Mrs Ekanem opined that the driving force to clamping down on GBV cases should be premised on the conscious search for solutions to why GBV existed and what necessitates the causes.
On finding solutions to GBV related issues, Mr Ekanem argued that the home plays a key factor in helping to prevent or curb any form of violence/negative attitudinal and behavioural patterns because that is where the first set of training begins.

Also, she recommended that appropriate bodies should initiate micro-finace programmes to increase women’s economic and social power, government should pass legislation that protect women from violence, strengthen women’s ability to earn money and support their homes by providing skills training for women and raise public awareness of the poor conditions some women face particularly in rural areas.

Speaking on Drug Abuse and Your Health, the President Nigerian Medical Association, Akwa Ibom State Chapter, Dr Nsikak disclosed that drug among was a prevalent issue among the youth who take drugs indiscriminately without the supervision of a medical personnel.
Dr. Nsikak explained that drugs are abused when people take them for other reasons different from what it was manufactured for. He stressed that the hazards of drug abuse can be catastrophic as it can lead to mental disorder, heart diseases, physical and psychological consequences among others. He added that drug abuse was prevalent among children from broken homes, children of busy parents, peer pressure, unemployment, poverty etc.

Presenting a paper on the topic ‘’Tackling Sexual Exploitation and Abuse’’ Dr. Mrs Ukpong Udofia, Director Centre for Gender Studies, University of Uyo stressed that GBV is one of the notable human rights violations deeply rooted in our society which if not adequately address can rip our society of good peace.
Dr. Udofia while narrating an incident where a 15years old girl was lured and drowned by a young man and his friends said GBV can be manifested in many forms ranging from intimate partner violence to male and female partner killing.

On sexual exploitation and abuse, Dr. Udofia said ‘’it is the actual or attempted abuse of position of vulnerability, power or trust for sexual purpose, be it political and emotional sexual abuse; is the actual or threatened physical intrusion of a sexual nature whether by force or, unequal and coercive conditions.’’
She further added that sexual exploitation brings harm to those mandated to be protected but is jeopardized by the expected, stressing that women are the main target who are most times forced into prostitution, pornography for financial benefits against their morals and health.

Professing solution to sexual exploitation, the Director of Gender Studies advised workshops, seminars be organized to sensitize rural and urban people against sexual exploitation, sex education should no longer be treated as a taboo at home and in schools while the child is young, suspected incidence of sexual exploitation should be reported promptly and immediate measures taken and sexual and abuse should no longer be used a reward for favour or as payment for any help or goodness.
Harping on the need to protect women and girls from violence, Dr Araoyinbo Idowu, a representative of the United Nations Population Fund Activities ( UNFPA), Cross Rivers State said his organization is concerned about women because they are ‘very precious in the society’ and should be given respect and empower them as well.

Different speakers in their goodwill messages charged the women and girls in attendance not to conceal any GBV cases in their environment but rather deploy proactive approach by reporting violation cases to the appropriate authorities as government cannot shoulder all the responsibility of finding out about all GBV cases.

In his goodwill message, the Deputy Governor of Akwa Ibom State Mr Moses Ekpo ably represented by Mrs Grace Ebong said that the present administration is bent on clamping on violence against women and girls as adequate measures have been put in place to give more awareness to the cancerous issue while also ensuring perpetrators are brought to book.

Mrs Comfort Umana who represented the Commissioner for Information, Mr Charles Udoh said that the ministry of Information will make it a task to send out all messages and informational articles that will help torchlight on GBV and drive a positive narrative on the need to protect women from violence.
Mrs Nelly Ukpong, wife of the Commissioner for Health in her remarks charged the people not to feel ashamed of reporting GBV cases when the need arises as a means will be devised to help GBV victims in the state.

The Chairman of Nsit Atai local government area, Mrs Emem Ibanga in her goodwill message said that the task of reducing GBV especially at the rural area involves the collective effort of every Akwa Ibomites. She lauded governor Udom and his wife, Mrs Martha for the initiative through the Ministry of Women Affairs and Dr. Glory for putting up programmes that address the menace of GBV in Akwa Ibom, adding that she would use her office to propagate the news against GBV in her local government.

Giving a vote of thanks, the Permanent Secretary Ministry of Women Affairs, Mrs Margaret Edem yhank governor Udom for his leadership disposition, for putting out policies that protect women and the vulnerable in the state. She lauded the wife of the governor, Mrs Martha and Dr. Glory Edet for the numerous programmes that focus on the wellbeing of women and girls in the state.

The event recorded a huge turnout of wives of Commissioners in the state, Commissioner for Science and Technology, Dr. Iniobong Essien, medical practitioners, wives of top government officials, women groups, schools, youth among others. The event was also spiced with cultural display, question and answer sessions from the speakers.

Previous: DON’T SEE THE LOST OF YOUR SIGHT AS THE END OF YOUR PRODUCTIVE LIFE – DR. GLORY EDET
Next: EKPU’S UNCHARITABLE STATEMENT AGAINST ONLINE MEDIA