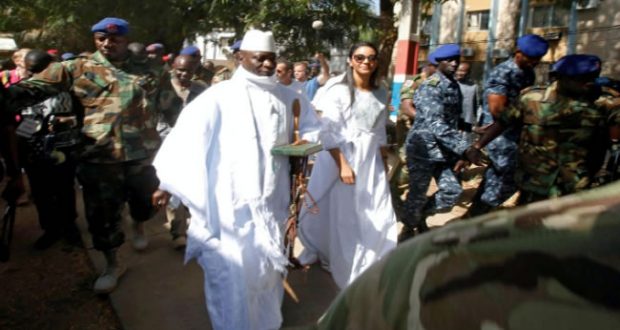 Barely two months after he was accused of rape by the country’s beauty queen Fatou Jallow, former President of Gambia, Yahaya Jammeh, has become a subject of investigation for crimes against humanity, with members of his death squad known as the ‘Junglers’ testifying against him.

Standing in front of the Gambia’s Truth and Reconciliation Commission on Thursday, Staff Sergeant Omar Jallow, revealed Jammeh ordered them to massacre Nigerian and other African migrants who he thought were “mercenaries” sent to overthrow him in 2005.

Jallow recalled a total of 30 migrants were cold-bloodedly killed.

His testimony comes a day after he fingered the ex-President for ordering the secrete execution of a prominent journalist with the country’s Independent Newspaper who had written cavernous articles about corruption that marked Jammeh’s dictatorial rule for 22 years.

The former agent of the Presidential Guard stated further that no less than 45 Europe-bound migrants including nationals from Ghana, Nigeria, Senegal and Togo, were arrested on a beach while trying to get to Europe, reports Agence France Presse.

“Yahaya Jammeh ordered the execution of the foreign nationals,” believing they were mercenaries sent to topple him, Jallow said.

They were taken to a firing range and then the soldiers were told by their commanding officer, Lieutenant Solo Bojang, that the captives were to be killed.

“Solo said these people were mercenaries and he told us that the order from the former head of state (Yahaya Jammeh) was to fire at them,” Jallow said, adding that the bodies were thrown into a well.

Human Rights Watch said the other migrants were also killed.