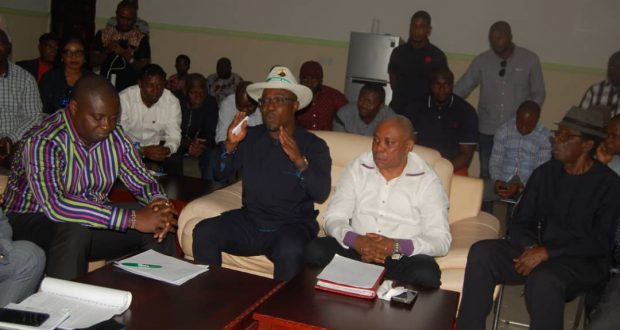 … as community insists on replacement of Mrs. Omekere, Ochor and Lucky, ors before further negotiations

For days now, the cities of Esit Eket and Eket has been on serious heat prior to the ongoing peaceful demonstration by youths of these communities due to the inability of Frontiers Oil Limited, an oil and Gas Servicing Company, operating in the community to adhere to the pact signed between them.

According to informations gathered by our reporter, some of the agreements in the pact which they signed was that the company at all times must advertise any vacancies if any, in any of the National dailies, Pioneer Newspaper, Radio Stations as well as all notice boards of the two Local Government Areas. Payment of tenement rate to host communities, sponsorship of graduate engineers in specialize skills training and non release of over N150 million annual community projects fund etc. are clear sign of lack of transparency, truth and disregard to host communities. Addressing the issue during an enlarged joint meeting held in the office of the executive chairman of Esit Eket, the Member representing Esit Eket/Ibeno State Constituency in the Akwa Ibom State House of Assembly, Rt. Hon. Usoro Akpanusoh expressed his dissatisfaction towards the high level of negligence of responsibilities by the Oil Servicing Company.

Akpanusoh stated emphatically that for the Operational Manager, Mr. Wale Adesina to have come out for a meeting with Stakeholders and the people of Esit Eket and Eket alone without a staff of the Company, connotes great assault and disregard on the People of both Communities. The five star Lawmaker stressed that there’s no way they would get to a reasonable resolution that will interest the host communities and the company at a time where peoples mindset are enveloped with bitterness and anger. He solicited that the Operational Manager be allowed to leave and come back on Tuesday, 26 June 2019 with the Management Board of the company for a more fruitful meeting with the host Communities.

According to him, the Status quo which states that the Oil Servicing Company ceases operations at the interim remains, and the five persons who were illegally and clandestinely employed by the Company be relieved of their employment with immediacy.

Supporting the idea of reconvening by the Lawmaker, the Local Government Chairmen of Esit Eket and Eket Local Government, Mr. Iniobong Robson and Mr. Frank Archibong who spoke extensively on behalf of their respective LGAs, appreciated Akpanusoh for raising such an opinion.

Iniobong Robson, the Chairman of Esit Eket, on his part registered his greiviance over non compliance to existing Memorandum of Understanding MoU, by the management of Frontier Oil, stressing that their conducts and administrative pattern is a clear indication that the recently conducted secret recruitment process by the company was deliberate to witch-hunt host communities. The chairman said that the continue retention of the above mentioned persons would certainly create disharmony and arouse undue tension between host communities and the company.

Mr. Frank Archibong stated that from the beginning of the meeting, even before the arrival of the House Member, he had queried the company’s representative, Mr. Wale for coming out for a meeting of such magnitude alone, and his inability to attempts the questions he was asked automatically means he was unprepared for the meeting.

“For the sake of peace and harmonious coexistence between our people and Frontier Oil, there is need for him (Wale Adesina), to take back our message to the Management Board and explain the position of host communities to them and come back with solution to all our demands”. Frank Said. Dr. Akpanusoh before leaving the Community for a meeting in Uyo, visited all the points blocked by the youths of the communities. He prayed them to be of good conducts during the protests. He advised them not to take laws into their hands or allow criminals to hijack the process thereby putting them into trouble. Akpanusoh during his visits to all Frontier Oil locations to address protesting youths promised to communicate the plight of the people as caused by the MD of Frontier Oil Limited, Mr. Thomas Dada and his management team to the state chief executive, Governor Udom Emmanuel and speaker of the 7th Assembly, Rt. Hon. Aniekan Bassey for prompt action.

He assured them that if the Oil Servicing company fails to correct their errors within the given date, the State House of Assembly will take immediate action to safeguard the interests and welfare of the people

Previous: Money Is A Coward, It Does Not Go To Where It Does Not Feel Safe- Gov Emmanuel
Next: Parents Of Newborn Triplets Thank Martha Udom Emmanuel, Call For More Support