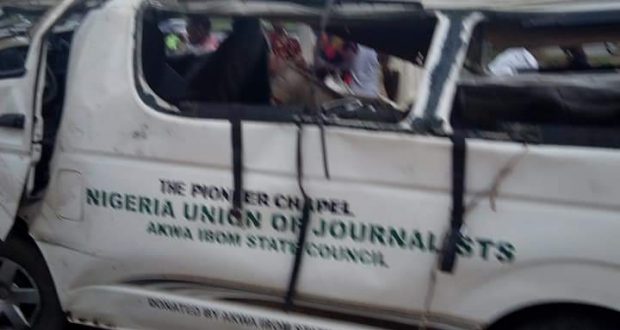 At least, four staffers of Akwa Ibom Newspaper Corporation (AKNC) are alleged to have died in an auto crash in Uruan local government area of Akwa Ibom State on Wednesday.

AKNC owned by the state government is the publishers of The Pioneer newspapers.

The accident was said to have occurred as the staffers were returning to Uyo from Uruan local government area after attending a traditional marriage of the daughter of one of the administrative staffers in the corporation.

An eye witness said the driver who ran speed was said to have lost control along a sharp bend on the dual carriageway leading to Victor Attah International Airport, Uyo.

In the 18-seater bus of The Pioneer Chapel, Nigeria Union of Journalists, four staffers were alleged to have lost their lives, four were unconscious including the driver while the rest sustained serious injuries.

The surviving ones were said to have been rushed to the University of Uyo Teaching Hospital, Uyo while some were taken to other privately owned hospitals.

Straightnews reporter called on telephone one of the AKNC senior staffers, Mr. Ossom Asaka whose wife is alleged to be one of the victims, but his telephone was switched off.

Speaking with Straightnews, Mr. Dominic Akpan, a senior staffer in the corporation confirmed the sad incident, saying that Bassey Nkponam, a senior staff writer with Pioneer was also involved.

Akpan who is also the state secretary of Nigeria Union of Journalists (NUJ) mourned with some of the departed souls and prayed for the quick recovery of the surviving ones.

This, according to a press release, followed the unfortunate accident on Airport Road this evening, in which some staff of Akwa Ibom Newspaper Corporation, publisher of Pioneer Newspaper are feared dead, while others are critically injured,.

The release signed by Dominic Akpan State Secretary said the Union condoles with the Pioneer Chapel and staff of AKNC over the losses.

However, the Award/Dinner ceremony holds as scheduled on Friday, December 13, at Watbridge Hotel and Suites, Uyo.