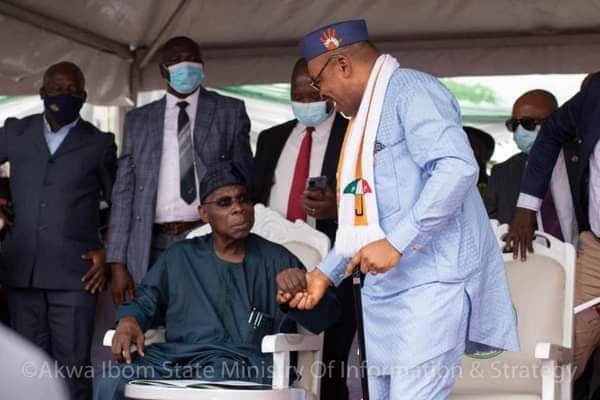 The Former President who said the commissioning of such a flyover is worth celebrating anywhere in the world, described Governor Udom Emmanuel as a good manager of Resources, stating that a good manager is known in the ability to manage resources in time of vicissitude.

Chief Olusegun Obasanjo commended Governor Udom Emmanuel for making him happy, by not letting him down, and for making the people of Akwa Ibom proud with his numerous achievements including the commissioning of the Flyover.

He thanked the Governor for making him a lucky man as the former Abak Road named after him also has a Flyover and therefore commissioned the Ilot Oku Ikono Flyover to the glory of God, the benefit of the users and the prosperity and development of the State.

Speaking, Governor Udom Emmanuel described the former President of Nigeria, Chief Olusegun Obasanjo as the father of Nigeria, who is ever fixing up the nation and the President who paid up the debt of Nigeria during his regime.