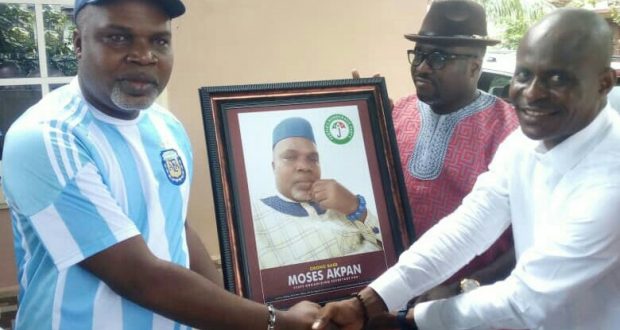 The State Organising Secretary, People Democratic party, Barr. Moses Akpan has continued to received commendations and honoured from well meaning individuals and groups on his elevation to a new office, with the latest coming from college of past Chapter Executives of PDP in Ikono local government Area, as they paid his a courtesy call on Friday October 2nd to congratulate and intimate him of their plans toward the development of the party at the local government level.

The group which came under the auspices of Elite Phenomenon led by the former Chapter Secretary, Mr. Rustom Alexander in company of his predecessor, the former Chapter Chairman of PDP in Ikono, Chief Dr. Etim Inyang and other friends. They thanked Barr. Akpan for his sacrifice and Worthy contribution rendered during his tenure as the chapter Chairman, which has kept the party on the steady growth.

Speaking, the leader of the group, Mr. Alexander said the visit was to strengthen the bonds of unity already existing between members of the group, he described Barr. Akpan as a true democrat and a man of peace who is deeply committed to the growth and development of the party, said he has set a benchmark of progressive politics for others to emulate.

They presented to him a well coloured portrait in recognition of his enormous contributions toward the development of the party.

On his part, the incoming Chairman of Ikono, Mr. Nyakno Okoibu, collaborated their stance, said Chief Akpan has distinguished himself from many became of his down to earth relationship with people, the Ikono helmsman hopefully used the occasion to solicit for support from party faithfuls to helped him emerged at the October’s 31st local government poll, promised to transformed Ikono to the long awaited Eldorado

In his response, Barr. Akpan described the visit as home coming, thanked the team for such an honoured, said he always attach so much important to recognition coming from the home became he believed that no Price commands higher value than the one given by the beneficiary’s direct constituency, assured them of his continues support in line with Governor Udom Emmanuel completion agenda.

Previous: Professor Ndaeyo emerges as the 6th Uniuyo VC
Next: AKWA IBOM DEPUTY GOVERNOR CALLS ON PEOPLE TO EMBRACE READING CULTURE … As The Superior You unveils to members of the public