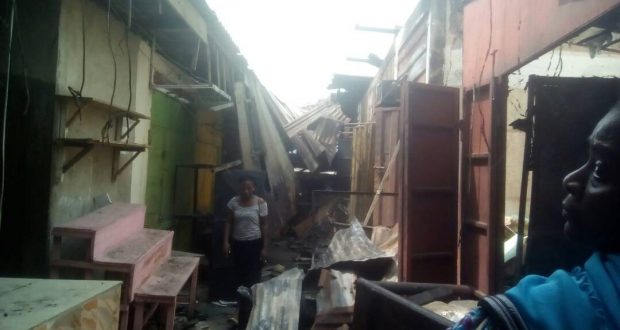 An inferno from an unknown source has gutted a section of the popular Marian market Calabar, the Cross River State capital.

The fire is said to have began in the early hours of Monday (today), around 1am and affected four lanes of the market,

Items destroyed by the fire include clothes, electricals, home utensils, food stuff, fabrics and even cash.

When this reporter visited the scene, the fire had been put out but it was not clear how.

Some of the affected traders said while the fire was raging, they called the state fire service but they didn’t respond to calls leaving them to struggle to put off the fire by themselves.

Some said in the course of trying to save their goods, as they brought them out, hoodlums looted them till the fire went off on its own at about 7am.

One of the traders selling shoes was said to have slumped on seeing her shop down in flames.

Another trader shared his ordeal on how the items he managed to save from the fire were stolen by hoodlums.

At the time of filing this report, little flames could still be seen billowing from a plastic shop.

Below are some pictures from the scene.