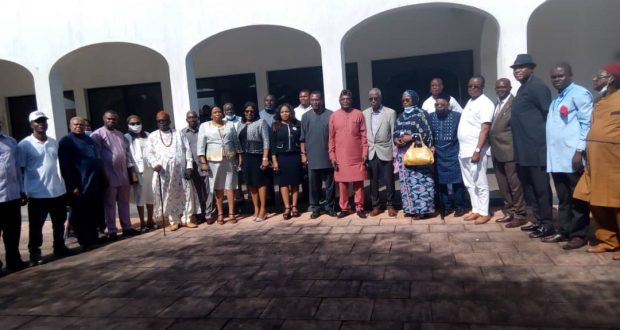 FG Moves To Recover Over 40% of Uniuyo Encroached Land

The Federal Government has assured governing council of the University of Uyo, that the ministry of education is ready to partner with them on measures put in place to recover all portions of land belonging to the university from land grabbers.

Minister for Education, Adamu Adamu gave the assurance when he led the federal government team to the affected part of the land during his visit to Akwa Ibom State.

Adamu who was represented by Permanent Secretary, Federal Ministry of Education  Sunny T Echono Said the government has put in place stringent laws against land grabbers in and around the institution.

He noted that anyone who ran afoul of the laws would be made to face the consequences.
Speaking on the sideline of the visit, The Special Assistant to Governor Udom Emmanuel on Education Monitoring, Akparawa Udeme Udofia said that Governor Udom Emmanuel led administration is taking the issue of encroachment and land grabbing seriously, as it portrayed the state as one in which lawlessness reigned.

He assured the institution that the ministry of education would do everything possible to recover its land that had been encroached on, for possible expansion.

Receiving the federal government delegation to the state while on-site inspection for the Federal university of science, the State Commissioner for Education, Idongesit Etiebet, thanked the National University Council (NUC) for putting quality assurance mechanisms to ensure standard in the nation’s tertiary institution.

Tibet on behalf of the Governor thanked the host community for providing the site for the university and urged the youths to grab this God-given opportunity by desisting from destroying equipment at the site, as it will create job opportunities and bring investors to Ikot Abasi.

Adamu expressed appreciation for the support and cooperation of the Akwa Ibom state governor, Udom Emmanuel, adding that President Buhari is impressed by the infrastructural strides his administration has taken. Again, the minister reinstated the decision of the government to commencement work at the site immediately as takeoff funds to facilitate the project is on hand and would be released promptly.

The Paramount Ruler of Ikot Abasi, Edidem Utukubom and members of the Ikot Abasi community/village council were also present.