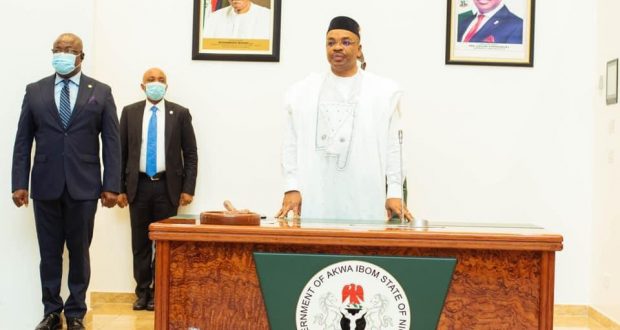 Today, the Executive Council of Akwa Ibom State Government met at the EXCO Chambers of the Governor’s Office . The meeting was presided over by HE, the Governor, Mr. Udom Emmanuel with HE, the Deputy Governor, SSG, Chief of Staff, Head of the Civil Service, Honourable Commissioners and Special Advisers in attendance.

Council undertook the following business:
Received the report of the farmers enumeration exercise and creation of the Akwa Ibom State Farmers Information Management System. Council directed that a mop up round of enumeration be undertaken to capture those who may have been missed during the previous exercise. Council chairmen, religious and traditional leaders were urged to mobilise people under their control to participate in the enumeration.
The progress report of the Technical Committee on Agriculture and Food Sufficiency was received and deliberated. Council tasked the committee to double their efforts, in order to help the actualisation of the government’s goal of producing at least 80% of the food consumed in the state.
Council directed that all Local Government Areas should prepare to give at least 500 hectares for commercial farming purposes .
The security situation in the state in preparation for the local government elections was reviewed and security agencies charged to be on red alert to maintain law and order. Council urged all citizens to act responsibly during the period of the elections and beyond.