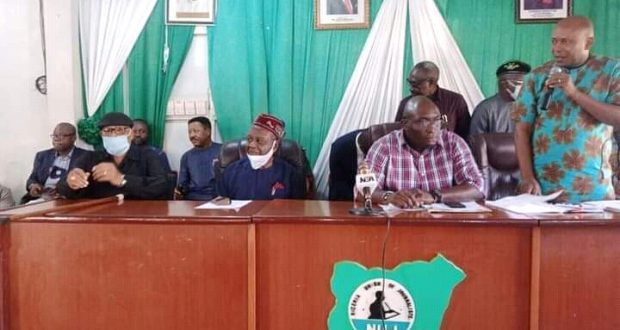 The Former Governor of Akwa Ibom State, Obong Victor Attah has harped on the need for government at all levels to create a platform where citizens can dialogue regularly with their leaders whenever they wish to draw government’s attention to matters of national concern, without necessarily having to embark on protests.

The Elder Statesman stated this during a press briefing at the Nigeria Union of Journalists Press Centre, Uyo on Friday, while reacting to the recent attack on some Nigerian youths who staged a peaceful nationwide protest over police brutality.

Addressing newsmen, Obong Attah called on the state and Federal Governments in particular to do something about the demands of the endSARS protesters before “it is too late”.

The events of the last three weeks which have enveloped our country in gloom are not ethnic, religious or, by any means sectional. They are national. However, given my primary constituency of Akwa lbom state, I want to start this statement by quoting the second and last stanza of Akwa lbom state Anthem which was recently launched by Our State Governor: “God of mercy hear our plea Make our land a place to be Let the war-like sheathe his sword Still all vices in the land Grant your rule O Prince of Peace That our state may ever be Peaceful ever! Warring never! Let your will O God forever reign”.

Such sentiments as are expressed above do not admit of such activities as have plagued us in recent times. I therefore urge all Akwa lbom youths to rally in strong defence of their inheritance and to be totally united in their condemnation of all manner of unethical behavior and hooliganism that can lead to the destruction of personal and public property.

I also join my voice with others in prayer that God, in His loving mercy, may forgive their sins and grant kind admittance into His kingdom of peace to the souls of those who have lost their lives in this struggle. May He also heal our land and comfort us as we try to bear this irreparable loss.

The question that must be asked is, how did we get here? I am aware that our police have won several acclaims and accolades during peace keeping missions abroad so why do they exhibit such abominably unacceptable behavior at home! I also know that public resentment to police brutality, particularly SARS, is not a sudden thing, it has been building up.

In response, the Federal Government set up in 2018, a presidential panel on SARS reforms. After thorough investigation, the panel recommended the sacking of 37 police officers, and the prosecution of 24 others. The panel further tasked the Inspector General of Police (1GP) to unravel the identity of 22 other officers involved in the violation of human rights of innocent citizens. To the best of my knowledge no effect has been given to the panel’s report.

During the COVID-19 lockdown, the atrocities increased; voices of protests got strident but the authorities turned a deaf ear and the impunities multiplied. When the shouting got to a deafening pitch somebody callously dismissed it with the comments that the President will not succumb to intimidation or blackmail. Then the dam burst.

Our youths were shot and killed for seeking a change in the social order; for seeking a better future for themselves which we, the elders have denied them. In the process, a number of policemen and officers were also killed in the line of legitimate duty. The youths are our future; why must we deliberately set out to destroy our own future!!

Today the youths are being asked to return to the negotiation table. I am not aware that they had at any time abandoned such a table. Even now, I do not know if it has been made clear to them where the table for negotiation is set. I believe that there ought to be an institutionalised method for conducting such dialogue.

I thank the youths for accepting the President’s olive branch and coming out to bravely condemn the reprehensible acts of hooliganism and destruction in which we are now submerged. It is now patently clear that those indulging in these criminal acts are not the protesters but miscreants and hooligans who have hijacked the process. I want therefore to appeal to our youths, to eschew bitterness and to show further commitment to the peace process by halting all further protests so they will not be accused of participating in the destruction of their own future. There is no doubt that their primary purpose of EndSARS has been realized though at a heavy price. The healing process must now begin.

Today we apologise to the youths and so we should; but is that sufficient succour? They need assurances that the future will be better but can it, if we continue as we are? Here and their voices were raised shouting for Change, for True Federalism, Resource Control, Diversification, a New Constitution for Nigeria. Chile, which had also inherited a Military Constitution has just changed it through a referendum. Why not Nigeria!

Today, from every part of this country, the South-South, West, East, Middle Belt, North and indeed the Far North, more voices have now risen and combined into a thunderous national crescendo calling for a REBIRTH. In every part of this country today the urgent and compelling need for such a change has been acknowledged and endorsed. My plea, my passionate plea to the government is to please DO SOMETHING NOW BEFORE IT IS TOO LATE.

Let us not wait for people to come out on the streets to press their demand for change. God forbid, if that should happen, there would be no holding back. It would spell the beginning of an end. This is not a threat or blackmail but a prediction borne out of sound reasoning and the lessons of history.

I end this statement with this prayer taken from the second and last stanza of our National Anthem: “O God of creation, direct our noble cause Guide our leaders right Help our youths the truth to know In love and honesty to grow And living just and true Great lofty heights attain To build a nation where peace and justice shall reign”. God bless Akwa lbom State. God bless and preserve Nigeria.

Previous: EXCERPTS FROM THE STATE EXECUTIVE COUNCIL MEETING
Next: I am Commited to Service, Good Governance—Uyo Chairman-elect