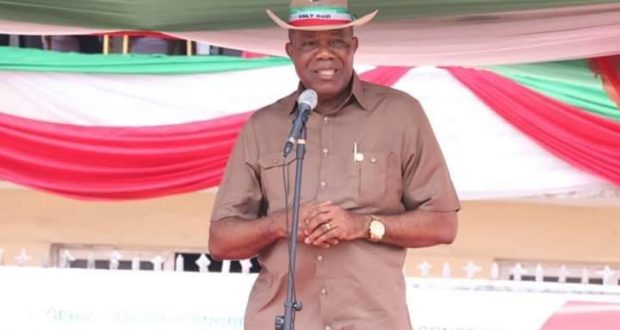 The Secretary to Akwa Ibom State Government, Dr Emmanuel Ekuwem has showered encomium on Governor Udom Emmanuel for his achievements within five years of his administration, describing him as a visionary leader.

Assessing Governor Emmanuel’s five years on the saddle, Dr Ekuwem noted that the Governor through his corporate governance structure had created lots of jobs through huge investments in industrialisation, agriculture, education, health, aviation, among others, adding that the prevailing peace and security in the state also impacted gainfully on the state economy and described peace and security as the greatest underpin of rapid socio-economic growth and development in any society.

“It would pleased you to know that Akwa State is second only to Lagos as the most sought after destination in Nigeria.

“When an investor knows that in Akwa Ibom there’s peace, security, transparency, accountability, the rule of law then he or she would feel safe in taking his money to Akwa Ibom to invest.

According to him, Governor Emmanuel has recorded massive strides in the health sector before the coronavirus pandemic as exemplify in the reconstruction and equipping of General Hospitals across the state and the Ibom Specialist Hospital which he said is “highly equipped with state-of-the-arts medical equipment.”

Ekuwem, who is the Chairman of COVID-19 Management Committee in the State added that Akwa Ibom has 19 ventilators before COVID-19.

“All that we’re celebrating today is about leadership.With the lockdown within Nigeria and the lockdown in the aviation industry worldwide because of COVID-19 for the past three months, where would you have those pieces of equipment from?It took vision and foresight on the part of His Excellency.He was not thinking about COVID-19.He was thinking about an average Akwaibomite.He was thinking about the health of the citizens because health is wealth,” Ekuwem submitted.

He described the building and commissioning of a 300-Bed Isolation Centre with “high-tech equipment” for Quarantine and Prevention of Infectious Disease at Methodist Hospital, Uruan Local Government Area by Governor Emmanuel as another revolution in the health sector.

According to him, the
greatest achievement of the Udom Emmanuel-led administration is the fear of God.

“The first and the greatest achievement of Governor Emmanuel’s led administration is the tendency by an average Akwaibomite to know that there’s God when he or she want to embark on a journey.This journey may be a business, it may be going for an election or one thing or the other that God is the one that sanctify the way.So, this administration is God centric administration.You know Akwa Ibom State is predominantly 99 per cent Christian State.That for me is the number one achievement because an average people now feel and know that you should do things with the fear of God and respect the feeling of others.”

Baring his mind on Nigeria 21 democracy, the State Chief Scribe said for democracy to be deepened, the Independent National Electoral Commission (INEC) should be neutral, while politicians should campaign lawfully and peacefully.

“Whenever we’re about having an election, you see a lot of tension, anxiety, threat of violence and gunshots.You see people being killed in a democracy when people should freely choose who they want, when there should be debate, dialogue, discussion and exchange of ideas for you to willingly and freely choose who governs you.But unfortunately, we’re still grappling with tidying up our democratic process,” he frowned.

Another way that democracy could be deepened according to him, is to settle all electoral cases in court before the swearing-in of the newly elected governor or expiration of tenure of the incumbent, adding that because of the prolonged court cases some governorship elections could not take place when others are having their own.

The SSG who decried the influence of ethnicity and religion in the Nigerian politics, stressed the need for people of sound mind to be elected and appointed into leadership position.