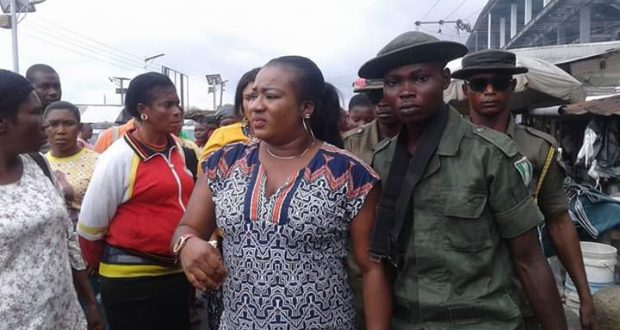 Through the order of the Executive Chairman of Eket Local Government Area, Hon. Frank Archibong, the traders that used to congest the market and Park road in Eket have been moved away from the road.

The simple and kind nature of the Eket Council Boss had been taken for granted for too long. People tends to take advantage of that and take laws into their hands. This was giving Eket a bad image. The entire environment was completely messed up. Gutters/drainages were stuffed with all kinds of organic and other waste materials. Traders that wanted quicker sales, had abandoned their posts inside the temporary market site (please note that the main market is under construction by a Chinese firm) to the main road, and like a bad habit, they keep extending and expanding to the major roads like; Grace Bill Road and Eket-Oron road.

This keeps attracting negative reports against the local Government Authority that had issued several warnings, sometimes using the men of the police force, to get them off the roads, but to no avail. You move them today, they come perching back up, the following day, like flies on feces. It was also revealed that some unscrupulous elements that acted as government revenue agents, would allocate portions of the road to these traders, especially women, some charged up to N200 and N500 per spot. Information reaching our news desk has it that the men were all arrested by the Police for extortion.

The main road became congested and causes gridlock along the road. Vehicular movement was almost impossible and even pedestrians finds it difficult to move on the road. It was a terrible situation and seemed uncontrollable.

The members of the public or buyers that finds it easier to buy their stuffs by the roadsides, instead of taking the stress of going inside the market, also caused go-slow on the road, talkless of those selling on wheelbarrow. This become detrimental to the law abiding traders inside the market, as they finds it difficult to make sales.

Since 9 days are always for the thief, and just one day for the owner of the property, the Executive Chairman couldn’t stand it any longer as he is desirous to sanitise the city, he ordered the Supervisor for Environment, Hon. Esta Nta and that of Health, Hon. Charity Ikott, to ensure that all the traders blocking the roads are “FORCED” inside the market. That was done with alacrity and avidity. The Supervisor for Environment, moved into action, employing the services of “Man O’ War Club” to execute the Chairman’s order. Like the movie, “30 minutes at Entebbe”, before one could say “Only God”, the entire road was cleared. Traffic began to flow instantly, like unlocking a water tap.

The women went into a wild ecstasy , thanking the Council Chairman and the “Esta-Charity Team” for the quick action. Driving or walking along Market road and Park road now, is “Easy like Sunday Morning”.

Previous: Akparawa Aniefiok Wilson Iwaudofia In The Dock
Next: Jersey Island begins talks with FG on how to return newly discovered Abacha loot