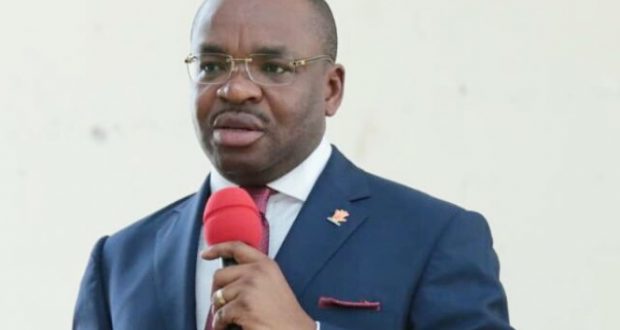 Education and the way forward in Akwa Ibom State

“If a man empties his purse into his head,
no man can take it away from him.
An investment in knowledge always pays the best interest.”

The quotation above by one of America’s founding fathers – Benjamin Franklin – underscores the place and value of education in our lives. Education is important because it empowers us in every aspect of human endeavour. But quite unfortunately, we have not given education the attention and priority it deserves in our society.

The first temptation is the assumption that education is the sole responsibility of government. While we agree that government has a task of making education work, we also have a duty by contributing our quota to support government efforts.

In the days of old, communities took more interest in education and saw it as more of their own than government’s. As it evolved over the years – from mission ownership to community level – you could find schools that were established by communities who only run to the government for approval and personnel. There were functional Parent – Teacher Associations (PTAs) who initiated and executed viable development projects in their schools.

Within the communities, families and villages established development leagues and endowments to cater for indigent but brilliant students – particularly those from poor homes. From there, it evolved into ethnic levels such as we had in Ibibio Union who was the pioneer of the famous “Golden Fleece” in Nigeria, where students of Ibibio origin were sent to study abroad in an all expenses paid trip.

This narrative illustrates the fact that from of old, education has always been a partnership between government and groups or individuals. At all levels, the standard was high and this was largely because of a shared responsibility between parents and teachers. Not only did parents accept the moral duties of responsible child rearing, they also subjected their children and wards to the trusted discipline of teachers.

As of today, it appears, the problem stems from both sides. It is bad when parents shirk their responsibilities in child upbringing and relegate them to house-helps, churches or mosques. But it is worse when the same parent shield their children from institutional discipline. Some even go as far as engaging teachers in a duel just in a bid to train their children for them.

On the other hand, most schools do not have competent personnel in the different areas of educational development. Majority of the schools do not have the necessary infrastructure for teaching and learning. Most teachers are not qualified – particularly in private schools. Even qualified ones do not possess the necessary skill or talent required for impartation of knowledge because they are themselves products of the fallen standard and decaying infrastructure.

In a bid to tame these monsters, the Udom Emmanuel administration in Akwa Ibom State has risen to its responsibility. First, the government has clamped down on illegal schools in the State and has gone a step further to close down those schools whose standard falls below expectation.

Similarly, in a swift and responsible move to close the gap between infrastructure and school in-take, there has been massive renovation and provision of new classroom blocks with desks for students and chairs for the staff. Such interventions dot the entire three senatorial districts of the state and are complemented by other necessities like potable water and electricity, as well as hospitals revamped by the present government through the Inter-Ministerial Direct Labour Coordinating Committee (IMDLCC).

This is because the free and compulsory education policy inherited by past administrations had come under a serious infrastructure deficit until Udom Emmanuel’s government moved in swiftly to combat the challenge to ensure that school enrolment keeps pace with available infrastructure.

Tertiary education is not left out in the massive upgrade. The state owned university, AKSU has witnessed total turnaround in infrastructure. There are new structures all over – lecture halls, office accommodation with furniture for both campuses in Ikot Akpaden (main campus ) and Obio Akpa, in Oruk Anam local government area. Accreditation for various courses by the NUC has raised the quality and standard of its programmes as well as the performance of students and integrity of its certificates.

The College of Education is also among the list of the transformation exercise. Before now, and in fact since its inception, only National Certificate in Education (NCE) were awarded to graduating students. But in its three years of massive investments, the college has been upgraded to a degree awarding institution with up to date facilities and infrastructure upgrade.

Only last November, Samuel Bill Theological College in Abak was inaugurated after a massive rehabilitation. The foremost pastoral training school is now wearing a new look with the old, dilapidated structures giving way to entirely new ones spawned with storey blocks ranging from lecture halls, hostel and administration blocks. There is also the Provost quarters. Interestingly, the school has also been repositioned to run as degree awarding institution.

As far as education is concerned, the Udom Emmanuel administration is a success story.

Despite these achievements, however, we are yet to reach our desirable destination. The truth is that we have left where we used to be. The giant step will move faster if we throw our full support to the government as partners in progress.

Well-to-do individuals and groups (private sector) should identify a need and endeavour to fill such gaps. Corporate organizations as well as NGOs should provide useful resources and assistance to move the quality and standard of education in our State. The truth is that whenever we fail in our responsibility, the consequences come back to us.

Take for example, the recent cult activities at the Government Technical College in Ewet and Abak and in Uyo High School respectively. No matter how much we continue to shift blames, we would still come to the reality that we have failed in our responsibilities as parents, teachers, opinion moulders, pastors and influencers. Soon, we will also discover that if we had joined forces to solve our common problems collectively, we may have avoided most of them.

So, we give credit to where it is due. The Inoyo Toro Foundation has over the years, supported education in the State by building teachers capacity through training and skills acquisition to boost their career. It also rewards performing teachers, particularly those in the sciences through their annual award ceremonies. Others should take a cue from this.

Finally, government has to reorganize the education sector. They must bring experts to redraw the school curriculum, adopt models and systems that best satisfies the needs of our people. It is not enough to pay out as much as N600million annually in exam fees for children who are loitering and more interested in cultism and cult-related activities. The education monitoring unit – either at the governor’s office or at education agency levels – is not doing enough.
Suddenly, we realized that parents/guardians should take proper responsibility for their children and wards. They can now sign undertakings for proper conduct! Only after the damage has been done! We all need to think out of the box and discharge our responsibilities effectively. Government should also open up to new ideas, thoughts and opinions from those who have useful contribution irrespective of where they belong.

Thankfully, the governor has reiterated his preparedness to welcome private sector participation. During the Akwa Ibom Education Summit/Exhibitions, first of its kind in the State last year, Mr. Udom Emmanuel said “We are determined to change the structure , the outlook and the content of the educational system in Akwa Ibom State . To me , education is an investment, it is not an expense .

“This education summit is to address a particular infrastructure that any state , any country must look forward to, which is what I call the soft infrastructure . It is not enough for us to concentrate on those physical and hard infrastructures .

“I must sit back with all stakeholders and we are going to create what I call a state of urgency in order to try this , because we want to create a structure that is enduring and is sustainable . I want to reassure you that we are committed and would reach that goal .

“We are determined but government alone may not be able to do it. Let corporate bodies and other individuals assist us . We can all have foundations too , even if is to provide us with chairs .

“The soft infrastructure”,he said, “is the human capacity. If you don’t build human capacity, we are wasting time , whatsoever we do cannot stand because whatsoever stands must stand on people . God ’s gift to man is another man , so if you build man , you are already building a society” .

This is the way forward. Let’s go.

Previous: Akparawa Udofia Complementing Govt Effort In The Educational Sector.
Next: Next Post