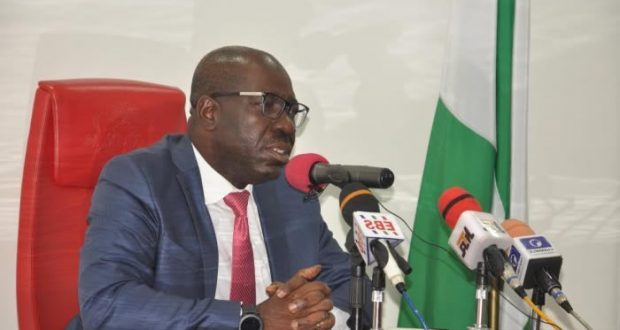 Almost two weeks after Edo State governor, Godwin Obaseki defied orders given by the House of Representatives for the state’s house of assembly to be closed and a new proclamation issued by him, President Muhammadu Buhari has finally intervened in the matter, urging the governor to re-issue the said proclamation.

This came as Edo State chapter of the governing party (APC) also on Sunday, dispelled claims that Governor Obaseki was feuding with his predecessor and National Chairman of the party, Mr Adams Oshiomhole, over control of the state and leadership tussle in Edo State House of Assembly.

Mr. Anselm Ojezua, the APC Chair, who announced the development during a press conference in Lagos, blamed the crisis on the deceptive nature of players in the state’s political space.

Vanguard reports that Governor Nasir el-Rufai of Kaduna State, who is a member of the committee set up by President Buhari to resolve Edo State crisis, declared the stand of the president at the first re-conciliatory meeting of the group in Abuja, last week.

Both the National Chairman of All Progressives Congress, APC, Mr Adams Oshiomhole, and Governor Obaseki are said to be members of the committee. The initial meeting of the committee, presided over by Fayemi, was held at Ekiti House, Abuja.

The newspaper quoted a source that el-Rufai informed the meeting as they commenced that he had information from President Buhari.

He hinted: “The Kaduna State governor told the meeting that President Buhari wants Obaseki to issue a fresh proclamation for re-inauguration of the House of Assembly, and that anybody interested in the speaker’s position should contest it.

“Governor Obaseki interjected, saying he thought they were looking for peace, but having seen the handwriting on the wall, even before the meeting, he said he would want to appeal to Oshiomhole for a situation where the self-worth of both sides would be accommodated in the final resolution.’’

It was also reported that the governor contended that if the present speaker, Mr Frank Okiye, would be sacrificed, then Oshiomhole should also shift grounds on his preferred candidate, Mr Victor Edoror, for a neutral person, Mr Emmanuel Okoduwa.

It was learned that el-Rufai demanded to know what Obaseki meant by accommodating the interests of both sides, saying if the governor wants anybody in the new dispensation as speaker, he should ask him to lobby his colleagues and he (Obaseki) should also lobby the lawmakers for him.

El-Rufai was said to have referenced the recent inauguration of the National Assembly, where the president and the party settled for the incumbent Senate President, Senator Ahmad Lawan, while Senator Mohammed Ndume insisted on his rights to contest, with everybody lobbying the senators-elect.

Previous: Governor El-Rufai pledges to sponsor the education of Almajiri boy who doesn’t like to beg from primary school till University
Next: I Will Not Be Part Of A Rubber Stamp National Assembly – Melaye