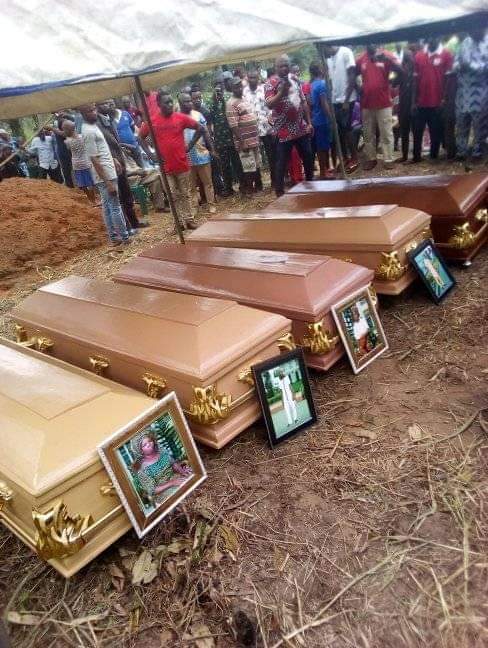 It was a moment of grieved amidst agony among relatives, friends and community people in Edem Akai village, Usuk Ukwok, INI local government Area on Thursday October 8, 2020 as the remains of fives family members who died in a road accident along Akampa Okoyong in Cross River State, laid to rest in their home town.

The five were among a group of others who where going to Abak local government Area from Akampa to attend their neighbor’s burial when the tragedy which claimed 16 lives struck.

Relatives broke down and wept uncontrollably after the hearses carrying the five bodies arrived the venue for the funeral service.

One of the Relatives, who spoke with Dozziernews, Engr. John Thomson, said it was a painful lose, ” Today is a sad day in my life, we have lay them to rest and we pray for God’s favour for those of us they have left behind, I don’t know where my fate lies after losing them all to the cool hand of death at once. But I know the good Lord who understands the beginning and end of every thing will give me the fortitude to bear the lost.” he said.

The burial which was attended by people from all walks of life was jointly conducted by Seventh Day Adventist Church and Jehovah’s witness.