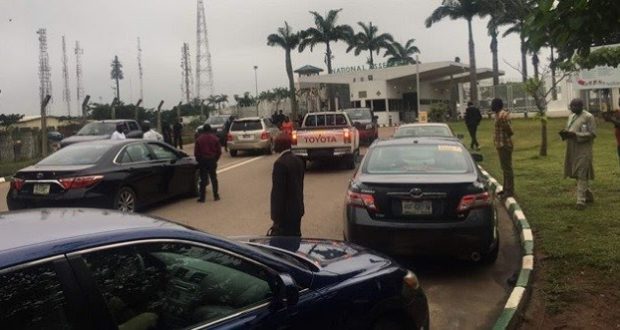 Operatives of the Department of State Services (DSS) have blocked all entrances into the National Assembly.

The fully masked operatives are reportedly turning away cars of lawmakers and other National Assembly staff.

According to TheCable, Senate leader, Ahmed Lawan, and some senators elected on the platform of the All Progressives Congress (APC) met with Lawal Daura, director-general of the DSS, at about 1am on Tuesday.

No reason has been given for the development, however, it may not be unconnected to a meeting of the leadership of the national assembly scheduled for this afternoon.

When asked, one of the operatives said, “it is order from above”.

Honourable Boma Goodhead from Rivers State, was seen in a video confronting the DSS operatives. According to her if former President Goodluck Jonathan behaved this way there wouldn’t have been democracy in Nigeria.

On Monday, Senate President Bukola Saraki called for a leadership meeting of the national assembly.

Saraki is also expected to meet with Mahmoud Yakubu, chairman of the Independent National Electoral Commission (INEC), as regards the N242 billion supplementary budget for the 2019 election, pending before the lawmakers.