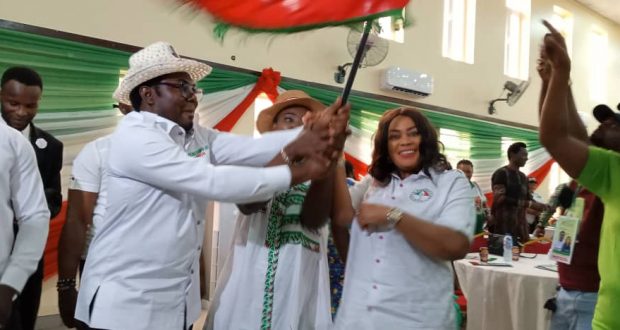 Presenting the party’s flag to Dr. Udo in Uyo, the state capital, Hon. Ekpenyong who was represented by Pastor Cletus Eshiet, Vice Chairman 3, urged all party faithful in Uyo to turn up en-mass and vote the party’s candidates in the chairmanship and councillorship positions to victory.

Responding, Dr. Udo, flanked by his wife and the Vice Chairmanship candidate, Pst. Sylvia Ekong thanked the party and local government leaders for finding him fit to fly the party’s flag during the elections.

He pledged his commitment to the service of Uyo people throughout his stay in office when he succeeds at the poll.

The event was graced by all the leaders in Uyo local government politics, women and youth groups as well as supporters of the various candidates.

The local government elections in Akwa Ibom State is scheduled to hold on Saturday, 31st October, 2020 across the 31 LGAs.

Previous: Revamp Our Economy Through Cooperative Societies …AKSCOFFD entreat A’ Ibom government
Next: EXCERPTS FROM THE STATE EXECUTIVE COUNCIL MEETING