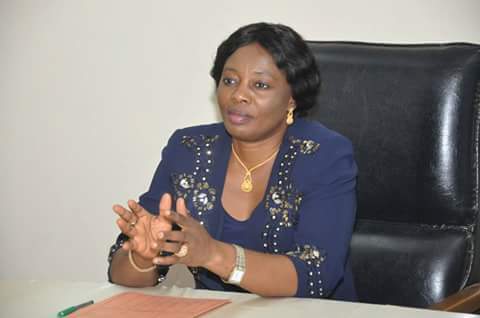 It was Gamal Abdel Nasser, a one-time President of Egypt, who said that “There is a role wandering aimlessly in search of a hero. The role is beckoning on us to move, take up its lines, put up its costume and give it life”. Honestly, keeping an eye on the activities and aspirations of Dr. Glory Emmanuel Edet nee Glory Akamkpo is as if Nasser was addressing her in his speech.

In her growing up, Glory cruise life on the smooth lane even as she broke the kernel of her fate with fine-stone. Born at St. Theresa’s Hospital, Use Abat in Ibiono Ibom local Government Area as a third child into the family of a renowned teacher, Pa Okon Akamkpo of Ikpe Ikot Nkon in Ini Local Government Area, the food basket of Akwa Ibom State where she had her elementary education. As a young girl in a family whose major occupation was education and a little of farming going by the fact that both parents were classroom teachers, she embraced education with both hands, and shortly after her elementary school, she proceeded to study Agricultural Economics in the University of Uyo in 1996, and graduated in 2006 with Second Class Honours upper division.

In 2004, her academic road-mapped her to the University of Ibadan for Master’s Programme and she was later hosted by Michael Okpara University of Agriculture for her Ph.D programme on Resource and Environmental Economics. Dr. Edet had a stint with the Department of Agricultural Economics, University of Uyo. As a lecturer, she distinguished herself throughout her stay in the Ivory Tower and as a gold fish, there was no hiding place for her, no wonder destiny catch up with her when she was spotted out by the performing government of an Uncommon Transformer Chief Godswill Obot Akpabio in 2013 to serve in the Ministry of Women Affairs as the State Commissioner for Women Affairs and Social Welfare. This woman of substance embraced her portfolio with a dint-of- hard work and service to humanity became her guiding philosophy, a virtue that stood her out to be reappointed to serve in the government of Deacon Udom Gabriel Emmanuel in 2015 as the commissioner for Women Affairs and Social Welfare.

Dr. Edet, a great mobiliser of women within and outside the state, brought colour, verve and panache into her job. She has cared for over seven hundred orphans and less privilege children in the Government Homes.

A visit to the Special Children Home, Divine Children Home, Correctional Centre, Shelter Afrique Transit Camp and Government Children  Home in the state reveals that no stone is left unturned in the running of the homes as the children and the care givers all gave good testimony of Glory Edet’s large heart in providing succour  for the children.

Under her watch, over one hundred and sixty lunatics within and outside the state capital have been evacuated, rehabilitated, empowered and reintegrated into the society.

She has provided financial support and gift items to over three hundred multiple birth parents couple with financial support. The Ministry of Women Affairs and Social Welfare under Dr. Edet’s leadership has sponsored a total of one hundred and fifty-five (155) widows to Jerusalem pilgrimage, sponsoring of physical impaired person to internal conference in Uganda, empowerment of widows from the thirty-one (31) Local Government Areas of Akwa Ibom State.

Adopting and reintegrating of abandon children in the state, training of visually impaired person in different skills and provision of care for widows of fallen soldiers.

Diligent in service is her second nature, no wonder she complements the effort of Her Excellency, Deaconess Martha Udom Emmanuel in her determination to lead the women of Akwa Ibom State out of woes and poverty through FehRep, her pet project. Dr. Edet, the only commissioner who retained her office on the platter of service delivery above self, hard work and excellent performance even when others were running from pillar to pole, canvassing for appointment into her office, she was on her praying knees seeking the face of her maker- ‘the All-Merciful-God’, infact Glory’s story is a script written from Heaven, God’s hand is in her life or how else would you describe the meteoric rise of a woman of her likes to political fame and reckoning in an oil rich state with multi-lingual colouration, without a political-god-father figure from her route.

By an act of hardwork and goodluck mixed together, she emerged a bright star among her peers.

With courage, she crushed all obstacles and threats to her education and life, strangulated fear and clothed her life with the upbeat of a ‘courage brother’. Victory songs never cease in her mouth, she sang yet another when she was reappointed by the government of Deacon Udom Emmanuel to superintend over the State Ministry of Women Affairs and Social Welfare, a song that most of those that were jostling for her seat later joined her to hum after seeing the victor in her. The Song goes thus

“To you Lord, Be all the glory!

To you Lord, Be all the honour!

To you, To you….ooooh, Be all the Glory!

Glory always attributes her many victories to God, as a determined achiever, she knows the meaning of hard work and she toiled relentlessly, assiduously and tirelessly to become what she is today. Like Abraham Lincoln, she believes that if God gives us two hands and only one mouth, there is no reason why man should starve. This is the very engine that has propelled her life to the rarefied orbit.

Taking her belief further, she dedicates everyday of her life to the accomplishment of higher ideals. For Glory, work is as comfortable as sports. Little wonder why forest of “award of excellence” have been poured on her by corporate and religious organizations to include: Excellence Award as Eti Eka  Mbio Mkpo Nnam; by Joint Association of Persons with Disabilities, Golden Mother of the year Award by the Presbyterian Church of Nigeria, Uyo cathedral, Excellence Award on gender development and social inclusion by Nigeria Union of Journalists, Award of Excellence for selfless service in the development of women and children by Apostolic Church of Nigeria, Eniong Offot District, Award of Excellence by Paul Harris Fellow of Rotary International District 9140 Nigeria, Awards of Honour by Agric Economics Students, Award of Patron by Christian  Council of Nigeria  and Excellence Award by University of Uyo Alumni Association among others.

In 2003, she bagged the best graduating student award in the Department of Agricultural Economics. Glory has published more than 28 Journal articles and presented 25 conference papers all to her credit.

Dr. Edet stood herself out as a sign-post of hope for the people, a hope that have since realized. As a commissioner, she has injected life into governance, by giving generously her time, talent and education to the building of a greater Akwa Ibom under her boss Governor Udom Emmanuel. Glory has achieved an outsized vision, while bringing in a rewarding kite of experience gardened over many years of vigorous and unwavering commitment to service to humanity.

Outside being blessed with abundance of humour, wit and wisdom, she lacks the inclination for pettiness and discrimination on the basis of tribe, religion, class or social station. She knows the meaning of loyalty to her principal, constituted authorities, friendship and to her people. She is always consistent in principles, humanity is her constituency and her leadership shines bold and bright, breaking the society’s suffocating conspiracy of the night of illiteracy, poverty, disease and hunger. She is a scholar and a rewarding legacy for leadership. Congratulations women of substance, the cap fits you- wear it in grand style. Cheers!