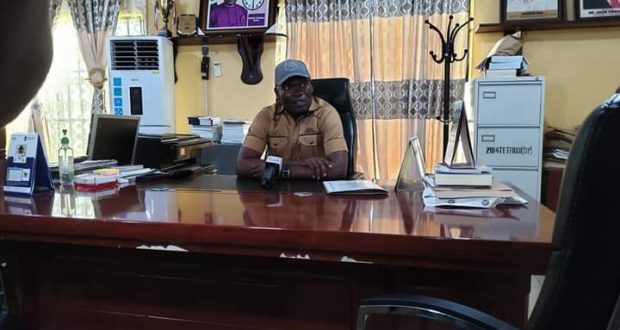 …as students pass vote of confidence on Provost, ors

The Provost, Akwa Ibom State College of Education, Afaha Nsit, Dr. Daniel Udo has reiterated that the leadership and members of Colleges of Education Academic Staff Union (COEASU), Afaha Nsit Chapter has resolved never to join any strike, whether local or national, as the Union has no issues with the College Management.

Dr. Udo dropped the hint today Tuesday 21st June, 2022 while addressing journalists at the College Premises today as he manned the entrance of the Institution to avert breakdown of law and properties by some unscrupulous elements.

Speaking further, the provost narrated with dismay how a select Union leaders of the Institution violated the Labour law by attempting to impose an uninformed industrial strike action on the Union members.

“I was given information that some staff came to place the College gate on lock and key without my knowledge, that of the Chief Security officer of the College and even the Management Staff.

“When I received the information, I called the Chief Security officer, and I discovered that he had no idea that anyone was authorised to lock the gate of the College.

“That warranted my coming out to the Institution’s gate, only for me to see some staff, the Chairman of COEASU, the Secretary, the Vice Chairman and two others at the School gate.

“They attempted locking the school gate to thwart Teaching Practice Orientation Exercise that was billed to take place by 12pm today within the school premises.

“I became curious and inquired why they want to lock up the school gate, they said they were on strike, I said no, you are not on strike. Because there was no such memo nor resolution passed by staff of the Institution.

“I’m a Unionist, if a Union is given instructions from the National, it is incumbent on the Chapter Leader of that Union to return to the branch and brief members about the directive from the National and allow them to react, take a resolution either to join or not to join the strike.

“But in this case, there was no such notice nor directive. I learnt the Chairman only came to school this morning, called few staff and gave them a matching order to pick up their bags and return home, saying that the National is on strike.

“And repulsively, members insisted that there was no congress nor meeting where an issue of strike was discussed and a resolution passed for COEASU to join the National strike that is peculiar to only National Colleges”, the Provost narrated.

Dr. Udo said the defaulting leaders of COEASU of the College have no reason to work against the school management, as his present administration has transformed the Institution infrastructurally and in human capacity development, with premium to general staff welfare.

He condemned in strong terms the insubordination action of the perpetrators of such unfruitful action, and emphasized that such action was not supported by members of the Union.

“Now, if such decision was a unanimous agreement of the Union members, everyone would have embarked on strike, but as you can see, reverse is the case here. Even me as the Provost, I don’t have the power to withstand the Union when it is pursuing a just course.

” Why? Because the mammoth crowd I would have seen here, would have scared me away and they would have had their way of preventing lecturers, permanent staff, casual staff and students from gaining access into the Institution.

“So, let me tell the Press and Akwa Ibom people that no single person can stand the Union when it is doing the right thing”, He disclosed.

It is also worthy of note that demands of the Union as forwarded to the Akwa Ibom State Head of Civil Service includes: enrolment in Integrated Payroll and Personnel Information System (IPPIS) and revitalization fund.

Dr. Udo who described the actions of the few Labour leaders as a sabotage, said he is not against industrial strike action, but due process must be followed with genuine reasons.

Impressively, the Provost who is versatile with union business expeditiously swung into action, manned the entrance of the Institution even under the scorching sun and normalcy returned to the Institution as lecturers and none teaching staff went about their normal routine of lecturing the students and their administrative duties.

On his part, the Chief security officer of the College, CSP, Sam Ediette Rtd. assured that safety of life and property in the College is guaranteed as the momentary anomaly has been kept under control.

Also speaking, Mr. Ubong Silas, Dean Students Affairs and a COEASU member also assured the students, the Provost and management of the College that there shall be no interruptions in academic activities in the Institution.

Feeling the pulse of the students who were seen in their various lecturer halls going about their daily academic pursuits, in clusters, passed vote of confidence on the provost, Dr. Daniel Udo and the School Management for their commitment towards making the Institution a one stop citadel of learning in the State.