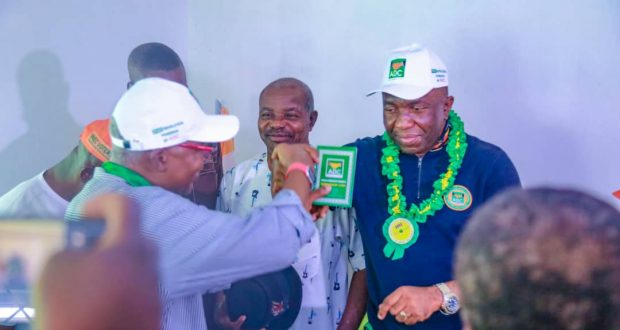 As Nigerian prepare themselves for the next round of elections come 2023, an international housing consultant, a renowned architect who is the brain behind the social governance ideology (SGI), a true democrat and the progenitor of A-One foundation. Arc Ezekiel Nya-Etok, has called on media professionals to write with caution not to use their tools and intellect in adding to the already bad governance suffered over the years.

The former Governorship aspirant of the Young Democratic Party in the 2015 election, gave the charge Wednesday, July 14, 2021, at African Democratic Congress (ADC) Secretariat in Uyo, Akwa Ibom State Capital, where he was officially received into the party by the National chairman, High Chief Raphs Oke Nwosu, to run for the office of the governor in next general election.

Arc. Nya-Etok who later briefed the media on his political move, and his intention to govern Akwa Ibom state at his Dream Garden Estate, Uyo, stressed that the time has come in the history of the country where journalists must join forces to build bridges and demolish fences, said all quest for self-determination and quality leadership must come to fruition in 2023 as ADC is ever ready to correct the wrongs of successive government.

The newly received party man, and governorship hopeful, expressed disappointment with both the PDP and the APC led administration, bemoaned that corruption has entered deep into the core value of our society, as leaders keep fighting corruption, unemployment with lip service and bias mindset.

Hear him, “Let me tell you the truth that the system of governance in the State do not want youths to grow. They are building foundation for youths that will depend on them forever. They want youths who will be begging them for what ever they want and they will give them peanuts as rewards for their loyalty. They want to make sure that youths consistently beg for money to go to school. Beg for money to marry after school and also beg for money to train their own children. The system is building a serious bond of dependency of youths that will be very hard to break”, Arc. Nya-Etok explained.

He promised to end such sacrilege and evil plan on the future of Akwa Ibom youths, while also expressed optimism that ADC will take over Akwa Ibom State in 2023. The Social Governance advocate promised to operate community driven and youths oriented government come 2023 if elected.

Receiving Arc Nya-Etok popularly call the “youth headmaster” The national Chairman of the party. High Chief Raphs Oke Nwosu, described the two political parties as being institution that’s very difficult to reform, call on all and sundry to give ADC a chance to demonstrate true Leadership.

“ADC is the only party that has a clear DNA. DNA of discipline and responsibility, radical transparency and we are imbibing these values so that it will be easy for us when we get to the government house, when we get to the villa”. Nwosu said.

On his part, the State Chairman of ADC, Mr. Utip Etiebet described Arc. Ezekiel Nya-Etok as big fish the Party has captured in the State. He added that Nya-Etok is a man that believes vehemently on endless potentials and capacity of youths to lead. He assured national exco of the Party that youths and entire Akwa Ibom people will vote for ADC come 2023.

The well attended ceremony, featured, the commissioning of state party Office at No. 6 Bassey Esau Street, Off Aka Itiam, and presentation of membership card to Arc Nya-Etok was witnessed by local government chapter chairmen, ward coordinators, and ADC party faithfuls among others.