Breaking News
Home / Breaking News / DON’T SEE THE LOST OF YOUR SIGHT AS THE END OF YOUR PRODUCTIVE LIFE – DR. GLORY EDET 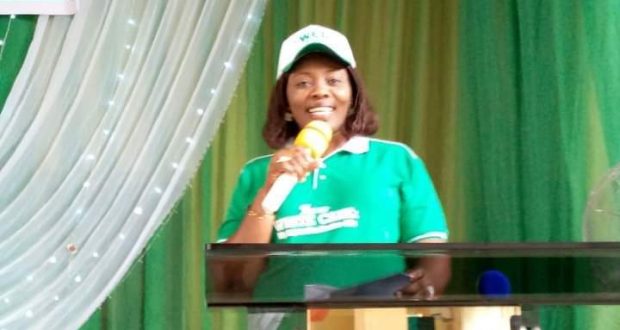 DON’T SEE THE LOST OF YOUR SIGHT AS THE END OF YOUR PRODUCTIVE LIFE – DR. GLORY EDET

…Charges Visually Impaired Persons To Key Into The Dakkada Philosophy Of Governor Emmanuel .

The Honourable Commissioner for Agriculture and Women Affairs, Dr. Mrs. Glory Edet has admonished the visually impaired persons in Akwa Ibom State don’t to see the natural or sudden lost of their sight as the end towards the productive life they suppose to live in other to add value to the society.

Dr. Edet gave the assurance on Tuesday at Women Development Centre during the 2019 White Cane Safety Day Celebration which is globally observed with the theme: “WHITE CANE, MY KEY TO PRODUCTIVE LIFE”

She stated that the state government under the watch of His Excellency Governor Udom Emmanuel has demonstrated unsurpassed passion for our people including people with visual impairment which has sustained an inclusive approach in governance by the implementation of policies and programmes that provide equal opportunities for all Akwa Ibom people including visually impaired persons.

“Let me use this event to exhort all visually impaired persons, not to see the loss of your sight as the end of your productive life, a license to engage in indecent street begging or other unlawful activities, but to believe in your talent and innate potentials, use the White Cane and maximize your productive capabilities, key into the Dakkada philosophy of our dynamic Governor and make the best use of the enabling environment and inherent resources created by government to improve yourselves and live your dreams.

“This year’s theme: ‘The White Cane – My Key to productive Life’ is quite apt and timely as the mission of the day is to educate the general populace about blindness and how the blind and visually impaired can live, move around, engage in productive activities independently while giving back to their communities.

“Therefore, we should remove all forms of barriers, stigmatization, discrimination against Visually Impaired Persons. We also celebrate the abilities and successes achieved by blind people in a sighted world as well as honour the many contributions made by the blind and visually impaired. She Stated.

Dr. Glory Edet also expressed satisfaction over the sumptuous and distinctive landmarks rocorded by the physically challenged persons in the educational sector and every field of specialization describing it as a welcome development in the state.

“In Akwa Ibom State today, we can confidently boast of highly educated visually impaired persons in different fields like Law, Education, Journalism, Administration and many other professional achievements made by blind persons in our State.

“It’s worthy of note that the sustained financial empowerment, the free training of some visually impaired persons at the Nigeria Farm Craft Centre for the blind, in Lagos and provision of start-up packs for the gradutates from the above centre to start up their businesses, donation of learning appliances like braille machines, braille paper, slates and stylus, lap-top computers with jaws as well as educational grants to visually impaired students, sponsorship, donation of several white canes and the celebration of the White Cane Day as we are all witnessing today.

“All these and many more are testimonies to the fact that His Excellency, Mr. Udom Gabriel Emmanuel is doing everything humanly possible to carry everybody along as well as touch the lives of all categories of Akwa Ibom people. She opined.

Speaking on the theme: ‘White Cane, My Key to productive Life’, Mr. Francis Bassey expressed dissatisfaction and displeasure on the inconsequential and inhumane treatment given to the people with disabilities with high rate of discrimination which he called on every concern citizens to always show love, kindness and affection to the physical challenged persons at every point in time.

“Today is a significant day celebrate the blinds using the White Cane as a symbol. It’s a day set aside by the United Nation to draw the attention of the whole world to what we call ‘The Chemistry of the Blind’ aligning it with the totality of what the blinds are passing through on daily basis.

“The blind should be given equal and humanitarian treatment by the people irrespective of the fact that they are blind but their intellectual capacity is still intact thereby contributing immensely to the growth and development of the society if given an opportunity”. He said

High point of the event featured performances by the physically challenged persons and presentation of White Cane to 170 disabilities, 5 each drawn from the thirty Local Government Areas of Akwa Ibom State exception of Uyo who was the host community that was given a slot of 20 people.