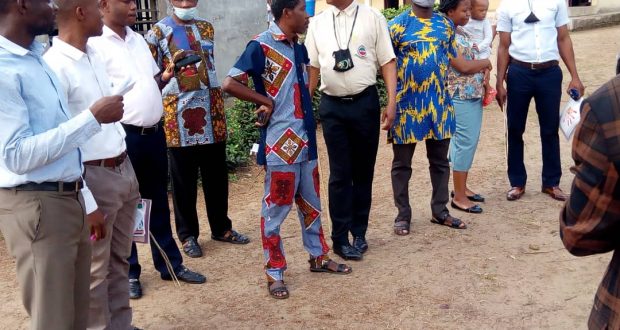 Worried by lack of compliance by some teachers on effective school management system despite consisted efforts by the State Ministry of Education, the Special Assistant to the governor on Education Monitoring, Akparawa Udeme Udofia has again warned erring teachers who take the routine school monitoring exercise for granted to desist henceforth as they may not be lucky on the day of punishment.

Akparawa Udofia issued the warning recently in Uruan local government area during his routine monitoring exercise of schools across the state.

In what he described as a total disappointment on the part of teachers and schools’ management, Udofia said enormous resources injected by the government into the system to reap benefits are defeated because of lackadaisical behaviours exhibited by some teachers.

He explained that government will only provide the resources and manpower as it is done in other places, but if teachers who are the major players can’t maximize and leverage on government’s efforts, such will affect students performance as well as their future.

Udofia, however, appealed to teachers and students to complement government’s efforts through their commitment, dedication and honesty in service delivery, noting that Akwa Ibom is known for excellence in every aspect.

He further disclosed that all schools in the state have been advised to ensure full compliance with the NCDC guidelines for the containment of COVID-19, stressing that doing otherwise will be counter-productive.

Akparawa Udofia, who also lamented the encroachment of school lands by neighbouring communities, called for relevant stakeholders to as a matter of urgency step into the matter and checkmate it.

“In strict compliance with the directive of the State Government, every machinery has been set in motion to secure the school land without any fear or compromise. I hereby, wish to warn anyone or group of persons, who may want to foment trouble on government properties to refrain as law enforcement agencies have been officially briefed through the state ministry of education about this development, and government will not fold its arms to see people taking what rightfully belongs to them”, Udofia explained.

On his part, Mr Effiong Sam Akan, a new principal who just resumed at Idaga Secondary School, Nung Oku Uruan, thanked Akparawa Udofia for his doggedness and commitment in going round schools for monitoring, he expressed optimism that his visit will benefit his school, while also appealing to him to keep the faith in complementing government’s efforts.

Also speaking, the village Head of Nung Oku Uruan, Etenying Uduak Etim Bassey who doubles as the school PTA Chairman called for urgent government’s intervention as well as the provision of basic school equipment to enhance studies in the school. The village head opined that perimeter fencing in the school will settle the encroachment issue without much ado.

One of the ward leaders of Nung Oku Uruan community and SA to the governor on Research and Documentation, Mr Emmanuel Nicholas commended Gov Udom Emmanuel’s administration for the ongoing construction of Anua-Mbak-Ishiet road which has heightened the level of development within the community while giving prominence to the only public secondary school that is serving the twelve communities in the ward.