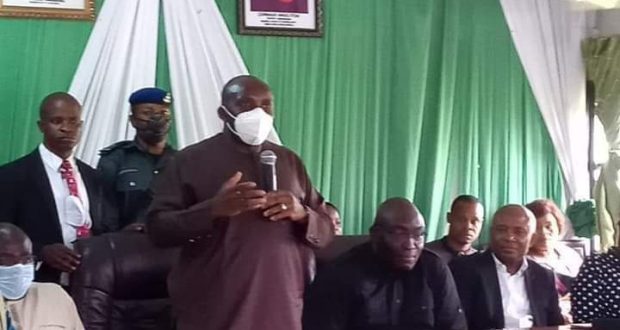 DON’T KILL YOURSELF FOR ANY POLITICIAN – UDOEDEHE

The Acting National Secretary of the All Progressives Congress (APC), Senator John James Akpanudoedehe has urged Akwa Ibom people to desist from risking their lives on the altar of partisan politics for politicians whom he said may not even remember them after eventually clinching power.

Sen. Akpanudoedehe gave the charge Monday, 9th November 2020, during a Press Conference held at his instance at the NUJ Press Center, Information Drive, Uyo to mark his 57th birthday anniversary.

Addressing the Conference, Sen. Akpanudoehe, commended the Comrade Amos Etuk led-EXCO for opening the doors of the Union for both the ruling and opposition parties to freely state their positions on issues of governance as well as matters that affect the development of the state.

Akpanudoehe who described the press as one strong institution no government the world over can remove or overrun, urged journalists to take advantage of the enormous power they wield to drive the needed reforms in the system to bring good governance to the people.

The APC strong man who averred that “Without the Press, there’ll be no democracy anywhere in the world”, further tasked journalists on living up to the agenda setting role they owe the society.

“Don’t lock your door against the opposition. You don’t know who God would use to salvage you.

“Forget about the fake loyalty you see some people forming to get favour from the government in power. The same people you see today singing PDP to the high heavens would be the first to join APC once power changes hand”, Sen. Akpanudoehe posited.

The Senator also used the opportunity to clear the misconception some persons (including some journalists) have about him.

“Some information you’re carrying about me is what my enemy told you. When they consider the level of love people have for me, they feel increasingly intimidated and say we should not allow him. They resort to painting me black.

“So, if you have any predisposition of hatred against me, please drop it. I have not offended you. Stop judging me by the false claims that those that do not want you to be liberated are spinning”, Sen. Akpanudoehe submitted.

He also tasked journalists to help in building strong institutions rather than individuals, adding that what has helped the United States of America to always put whoever they want in power was a factor of the strong institutions they’ve built over the years.

Meanwhile, preceding the Press Conference, Sen. Akpanudoehe had visited the State Secretariat of the APC at 149, Ikot Ekpene Road, Uyo, Akwa Ibom State that was attacked during the #EndSARS protest a fortnight ago to inspect the level of damage.

Sen JJ Akpanudoehe who was conducted round the facility by the Acting State Chairman of the Party, Dr Ita Udosen in company of other State EXCO members of APC, promised to take up the issue at the national level as well as mobilize other appointees of the party at the national to remedy the situation.

He however commended youth of the party for not launching a reprisal attack which he said would have worsen the situation.