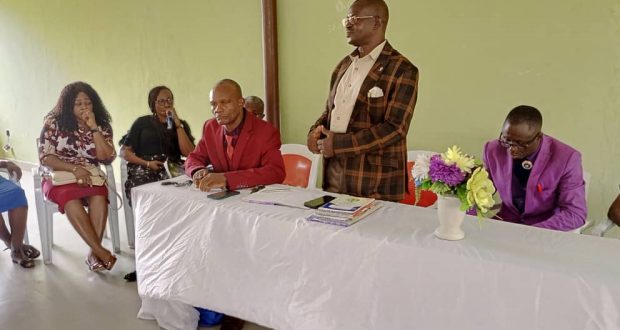 Do Not fail Our future ~ Gov Emmanuel’s Aide Advices Teachers.

Teachers in Akwa Ibom state have been asked to discharge their professional responsibilities creditably as their contribution towards actualising /building the Akwa Ibom state of our dream educationally.

The Special Assistant to Governor Udom Emmanuel on Education Monitoring, Akparawa Udeme Udofia gave the charge during his routine monitoring of schools in the Eket local government area.

The SA, who is very passionate about the elevation of the education status of the state, appealed to teachers to see themselves as motivators, to help their students attain greater heights while developing a career for themselves.

He explained that teachers are closer to students, therefore, they should show commitment towards the students’ educational pursuit as well as being a good example for them to emulate.

Dissatisfied with the mode of dressing, lack of complete note of lesson and lateness to work by some teachers, the corp members and students alike, the academic administrator warned teachers to dress the way they would want to be addressed by the students and the public as such will add respect to the noble profession, and prepare the students for the tasks ahead.

He also frowned at the nonchalant attitude of some teachers, emphasizing that the Akwa Ibom state government through the Ministry of Education will not relent efforts in checking the activities of schools to ensure sound academic upbringing.

He further noted that poor attitudes to work, as exhibited by some teachers will have a huge negative effect on students, reduced productivity and excellence, as well as expose them to criminality.

He hailed Governor Udom Emmanuel for swiftly identifying challenges in the area of manpower and his prompt action in recruiting teachers to fill in the lapses as was noticed in some schools visited.

Taking a critical view of schools visited, Udofia observed that most teachers were still in the habit of absconding from their duty posts. At St. Paul’s CME School, only one teacher, Mrs Ima Ntiedo Sampson, was seen engaging the pupil of Early Child Education class, two others were still loitering around while the other four were absent as at 8:30 in the morning.

At Government Secondary School, Afaha Eket, out of the 37 staff strength, 31 were in school but did not engage the students effectively. Some students were seen writing notes on the board for their colleagues to copy which the SA, however, condemned as unethical.

During an extensive meeting with the staff of the school, comprising of the Principal, Mr……., the seven Vice Principals, teachers including corp members and student teachers, Udofia informed them that his duty as an education monitor encompasses the monitoring of education activities in primary, secondary and tertiary institutions be it public or private which makes it mandatory for all hands to be on deck to ensure the functionality of the system. He, however, sounded it loud and clear that the sector, because of its foundational popularity is not for dropouts but serious and committed minds who will be proud to see the pupil they thought become successful in life.

Harping that as a citadel of learning, every serious-minded teacher should engage total teaching techniques which involve; mode of dressing, the interest of the people you teach and general ethical conduct.

Responding to the meeting, the principal of the school, Mr Eyoh Etim Aweh thanked Udofia for the visit, being the first since he resumed as the Principal of the school. He expressed a deep sense of appreciation for his dexterity and fatherly advice without intimidating or witch-hunting and promised that all advice and corrections will be strictly adhered to.