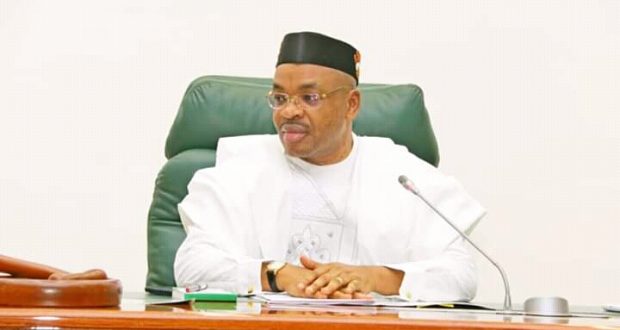 “In 2021 we have declared war on education the same way we declared on healthcare in the state before Covid-19. We have a comprehensive education agenda….We have been compiling and we are going to launch out aggressively”. – Gov Udom Emmanuel, Jan 3, 2021.

According to the Governor, the revolution, best described as war in the education sector, comes with a physical revamp of infrastructure, retraining of teachers, employment of new ones and security of facilities.

It seems the ex banker turned politician is on the offensive as he launches an all out onslaught against all the ills militating against the attainment of an educational system that is geared to dealing with 21st century challenges in a dynamic and rapidly changing world.

Under the Governor’s new educational policy, his dream is to create an educational system where the products can graduate and become employers of labour themselves. That way, the private sector will become the falcrum of the economy.

It is always argued that rational people will always adopt what they consider the most effective means towards the end they seek and Governor Emmanuel understands that if Akwa Ibom State is to take full advantage of the economic benefits of the soon to take off multi billion dollars investments such as the Ibom Deep Sea Port and the Liberty Free Trade Zone, our educational system must be overhauled, redesigned and repositioned to produce the much needed technical and skilled manpower the sector may need.

The Governor is convinced that we must tackle the rot in our educational system. To him, the Akwa Ibom of our dream cannot be fulfilled to take advantage of the emerging economic dividends in the offing without being backed with an educational system that produces the majority of critical stakeholders and manpower to run Akwa Ibom’s future multi billion dollars investments and enterprises.

As he has said often, the recession and Covid19 pandemic will go or may recede but the devastating economic pains that it came with will take time to subside. This he has repeatedly said is why Africa must come together to fashion out home grown solutions to our problems as what works for the developed world may not produce same results here even if we domesticate same.

Under the Education Revolution, massive investments are targeted at basic Education at the primary level which is the most crucial being the formative stage. Gov. Emmanuel believes if we must mould the Akwa Ibom child to be better prepared for the future we all seek, teachers must be better trained to impact up-to-date skills and knowledge because in grooming the child, we cannot avoid our past and what fires a child’s memories are incidents of childhood, during a child’s formative years when energies abound and ripped with raw activities, when minds were malleable, idealism gaped with errors, when a child has imagination without judgement and strength unseasoned with guile.

This explains the government’s huge allocation and spendings on schools renovation and reconstruction, teachers training and retraining to build capacity towards improving service delivery thus creating a condusive learning environment that can help groom the Akwa Ibom child did the envisaged future we seek.

The Governor has not only declared emergency in the education sector because his action is aimed at addressing the serious unseriousness that hitherto pervaded the sector by some stakeholders but because he realises that a deficient educational system is as dangerous as a society without an educational system at all. Allowing the trend of the past to go unchecked would have amounted to surrendering to institutional decay.

An effective, efficient and forward looking educational system will lead to the emergence of a group of core skilled workforce that can fit in thus creating a high level of employment which will lead to stability and make the standard of living more condusive to democratic aspirations because if we allow the sector to continue as it were, the state’s developmental plan will be distorted and incapable of maintaining a balance.

Gov Udom Emmanuel’s philosophy is that if we must reform our economy, we must first reform our educational system because while Direct Foreign Investment is good, it will not lead to the prosperity we seek if we do not produce majority of the experts to dominate critical sectors of the state’s economy. The Governor’s vision is to have an educational system that will give our productive sector drive, purpose and vitality so that it will put the vast majority of unemployed youths to work. By so doing, the government safeguards internal security because a prosperous society is no longer a danger unto itself because a productive workforce and a strong middle class are the best guarantors of democracy.

The revolution adopted in Akwa Ibom’s educational sector is aimed at changing the narrative and reversing the case where the so-called local content policy is more mantra than practice. It is aimed at creating a system and a future where wealth is not for consumption alone but to empower the society for more wealth, afterall, the best revolutions are reforms that in the long run becomes revolutions.

As part of the reforms, an education summit was held to fashion out new ways of doing things to achieve new results.

The State Secondary Education Board (SSEB),even made a presentation before the State Executive Council on November 23, 2020, where her Chairman, Dr Ekaette Ebong Okon observed that it is pertinent to note that the state of our schools is indeed a far cry from what it should be in all the areas, hence, the need for an urgent intervention.

She stated for instance that in the course of the Board familiarization tour and inspection visits to Schools, it was discovered that most Schools in the state are in dire need of teachers.

“Presently the general teacher to students’ ratio is 1:97 in subject areas such as English, Mathematics, Further Mathematics, Physics, Chemistry, Biology and Geography while subjects such as Financial Accounting, Home Economics, History, Fine/Creative Arts, French and Ibibio have a teacher to students’ ratio of 1:484 as a result of non- availability of teachers in these subject areas”, she declared.

This submission necessitated the need for urgent teacher’s recruitment to fill in the vacancies. The government has commenced the process of recruiting 1000 teachers into the State Secondary School system as part of her education reform agenda.

Speakingwhile declaring open her first ever education summit in September 2020 which brought stakeholders to seek expert opinions on how to fix the broken school system,Governor Emmanuel himself had urged participants, including government officials, to be bold enough to come forward with the truth about how the state was faring in the education sector.

“We are not just doing one of those political gatherings. We are determined to change the structure, the content, and the output of our educational system in Akwa Ibom State,” the governor said at the summit. Besides participating in the first and the second day of the summit, sat throughout the deliberations and scribbled notes. He said there was a sense of urgency to the task ahead if the state must tackle the changes in the education sector
The governor advocated for entrepreneurial studies in the state-owned Akwa Ibom State University and appealed to corporate organisations and individuals to support the government to fix the education sector in the state.

Prof Nse Essien, the then Commissioner for Education noted that “the scenario of our educational system is characterised by extensive infrastructural decay in our schools, total absence of library facilities, non-commitment of our teachers and trainers, our science labs, technical workshops, and vocational centres have virtually become museums,” the commissioner for education in the state. Basic amenities that create a true learning environment such as dormitories, dining halls, and recreational facilities are luxuries. Our curriculum does not train students for the labour market”.

With the recent cabinet reshuffle and a new Commissioner for Education saddled with the responsibility of Implementing the government’s new revolutionary reforms, it is hoped that things will surely turn out for good and a new, effective, efficient and result oriented educational system will birth in Akwa Ibom State.

…….. We’ve mapped out. We have an education think-tank. We’ve linked up with all the Akwa Ibom eggheads across the world and we meet with them on zoom; wherever you are, once we know you have something to contribute to the development of the state, education-wise, we contact you.

……We will start with physical infrastructures of those schools. We will train the teachers; all the secondary schools in Uyo must be fenced round beginning from this January and we will provide security men in those schools to keep the facilities we buy in those schools. Let us correct this anomaly”.

Previous: NKANGA WAS A PATRIOT OF NO MEAN REPUTE- PANDEF
Next: MINISTRY OF TRANSPORT TO STREAMLINE TRICYCLE OPERATION* Rebrand compliance,monitoring unit