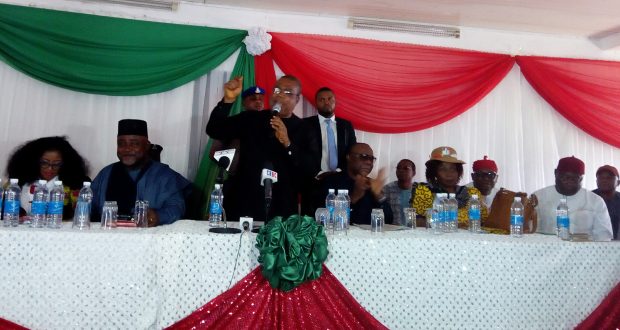 But, posters, billboards and banners carrying the faces of aspirants and those of Mr. Ayade and his deputy, Professor Ivara Esu were on display at the Akamkpa local government area secretariat where Mr. Esu was given a rousing welcome to the endorsement town hall meeting presided over by the former state chairman of the PDP, Ntufam Achort Okon.

The motion to endorse the duo was moved by Assembly man, Matthew Olory (PDP Akamkpa 1) and seconded by an elder statesman, Dr. Ukam Edodi.

Olory while moving the motion averred that: “Because our own son who has a lot of followership as a one time Vice Chancellor of the University of Calabar, he has people that he has imparted knowledge into from Bakassi to Obanliku will also be his running mate.”

Edodi, who seconded the motion said that: “We are confident that your reelection in 2019 will enable us complete the ongoing dreams, programs and projects that are currently in place. It is important that we have this team that has worked so amiably, a team that has made us proud in the state; a team that has great compassion. So, I hereby second the motion moved by my brother Honorable Olory that come 2019, Biase and Akamkpa brothers and sister will work assiduously as we have always done to ensure that our dream come true.”

The event was attended by several PDP big wigs including a Board of Trustees member from the state, Professor Stella Attoe and incumbent state party chairman, Ntufam Inok Edim.

And, Mr. Esu in his remarks said that he was “humbled” by the endorsement given him and acknowledged the crowd that had trooped out to receive him.

He commended those who had spoken earlier and pointed out that the current administration means well for Cross Riverians as the projects were more people oriented and not just “location based.”

“If the rice city in Calabar begins to produce seedlings, those seedlings will be brought all through the rise growing areas of Cross River State including Biase and Akamkpa.

“If the Garment factory has started functioning, the people working there will be sons and daughters of Biase and Akamkpa also,” Esu said.