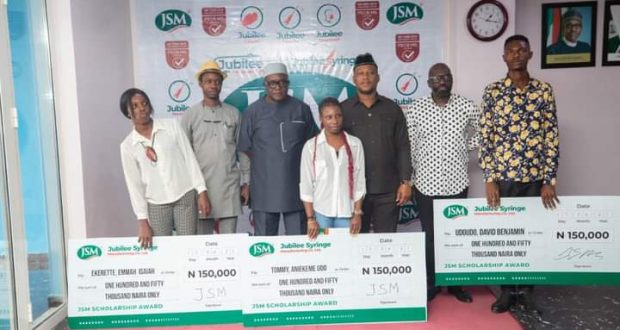 As part of its corporate social responsibility, the Jubilee Syringe Manufacturing company located in Onna Local Government Area, Wednesday, awarded scholarship to nine indegenes of the host community.
The beneficiary students drawn from the three host communities were presented with cheques at a brief ceremony at the corporate office of the company in Onna Local Government Area.
The managing director of JMC, Mr Akin Oyediran, while presenting cheques to the beneficiary students, Tuesday, said that a committee was set up earlier, to select students from Awa, the host community for the scholarship awards.
He stated that the beneficiary students from both the secondary and tertiary levels of the scholarship were selected based on intellectual merits.
The managing director of the company, Mr Akin Oyediran, said the initiative to float the scheme is part of the company’s Corporate Social Responsibility, (CSR).
Oyediran, who promised to sustain the scholarship scheme pointed that in investment in education of the youths, the company is gradually looking at instilling a sense of ownership of the company by the host communities.
“It being a long journey to get here today. As part of our CSR and our commitment to the communities, we in JSM and the MoU committee came up with the idea of having a scholarship award to be done every year.
“This idea to us is an investment because when we team up to give scholarships to people in our neighborhood to go and get all the talents and they come back we are hoping to give them jobs. And if we can give them jobs it’s actually a sense of ownership because they are from the communities.
“From the economic point of view, it’s better to give somebody job in the community to work for you than pick somebody anywhere in the country or abroad, so this award to me is an investment” he said.
At the event which attracted traditional rulers, members of the host communities and government functionaries, the state commissioner of information and strategy, Comrade Ini Ememobong, described the initiative as the best form of security.
He said integrating and partnering with the host community is easiest and cheapest form of securing an investment than spending money on security operatives.
Ememobong said “JSM has shown itself to be a good corporate entity by integrating the host communities into it operations. The beautiful part of it is that the company is investing in education. If you look at the people, when they graduate they will join the company and this is the easiest security.
“It’s better than paying police and the army to secure the place. As owners of the company, immediately they own the company can be assured that it security is guaranteed. The fastest way to train somebody is to train the mind, when his mind is trained you’re sure of security. An educated person is a predictable person; you can predict his responses at any given time”.
The commissioner further stated that extreme capitalism was ruining the world adding that what JSM was doing was humane capitalism and wished that the initiative be sustained.
One of the beneficiary students, Tommy Udo lauded the initiative of the organisation and the vision of the state goveror, Mr Udom Emmanuel for attracting the investment to the communities and promised to study hard to justify the award.
Other beneficiary students are:
David Benjamin Udoudo; Samuel Ekerette Okon; Miracle Anietie Philips; Ufot Miracle Ezekiel; Emmah Isaiah Ekerette and Aniekeme Udo Tommy under tertiary level.
Those in the
Secondary school category are:
Ruth Ubong Ekefre;
Promise Akpan Collins and Etieyen Samuel Inyang.

Previous: RE : 2023 GOVERNORSHIP: I’M NOT A CHRISTIAN — AKAN UDOFIA DECLARES
Next: NIGER DELTA MOVEMENT FOR PEACE & JUSTICE DEMANDS INAUGURATION OF NDDC BOARD