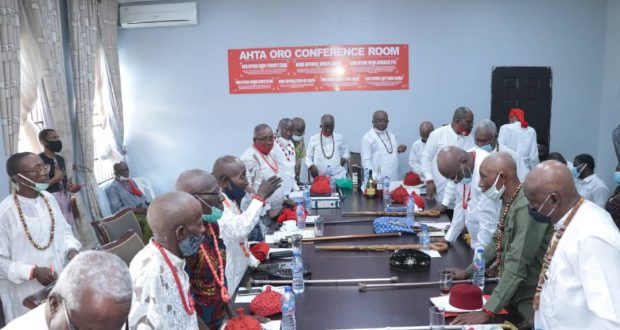 The Council equally praised and lauded the foresights of the Convener and members for initiating an idea aimed at quickening unity, brotherhood, enterprise, dialogue,diplomacy, focused leadership and above all, stimulating physical development in the five local government areas of Oro Ethnic Nationality.

These were the highpoint of Oro Leadership and Business Roundtable visit to the Traditional Rulers Council sitting at the Ahta Conference Hall, Oro Civic Centre, Oron town.

Briefing the Council on the real essence of the visit, the Convener, Barr. Omen Bassey said his group which is four years old thought it wise to come and intimate the royal fathers of its existence, seek areas of collaboration and synergy, obtain royal blessings and discuss sundry issues affecting Oro and her people while tapping into the wisdom bank of the Council vis-à-vis its objectives for the ultimate development of the enclave.

Barr. Bassey appealed to the traditional fathers to once again rekindle the Oro aged long tradition where education and human development was the pivot and where villages channeled revenue obtained from the production of palm produce into the establishment and renovation of schools, encouraged scholarship and training of brilliants indigenes in schools across all levels of education, describing education as the only tool available to Oro for development as a minority race.

The convener pleaded with the traditional Rulers to look into the issue of extravagant and unnecessary traditional demands during rites like burials and marriages, saying it was inhuman, uncalled for and retrogressive as it impedes Oro development, considering the spate of poverty in the land.

He tasks Royal Fathers on the need to always engender conferences where thoughts on communal management, peaceful co- existence and security will be cross fertilized and shared between traditional rulers and their subjects.

The former Secretary, Oro Think Tank, promised the willingness of the Roundtable to assist in any area of need once called upon, saying the group was at the service of Oro and her people.

Offong Oquong advised the Roundtable to not deviate from its established goals and to constantly reach out to Elders for wisdom and guidance whenever the need arose.

On his part, the Paramount Ruler Elect of Urue Offong/Oruko Local Government Area, (His Royal
Majesty) Offong Effiong Unanaowo, hailed the wisdom of the group, describing members as a body of knowledge passionate about the development of Oro community.

Offong Unanaowo expressed joy on the recognition accorded the traditional fathers even as he promised to utilized the ideas proffered.