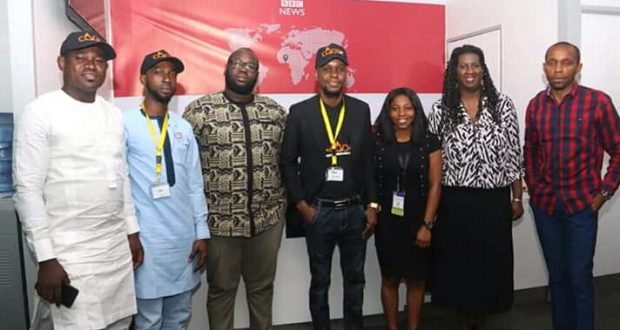 The Conference of Online Publishers in Akwa Ibom State, COOPA has called on the British Broadcasting Corporation, BBC to include Efik/Ibibio among their language services.

BBC currently has foreign language output of 33 languages, of which five are African languages with Hausa, Igbo and Pidgin Service making the list of BBC language service in Nigeria.

COOPA made the call today at the Lagos Office of BBC when select members of COOPA paid the Broadcast organization a courtesy visit.

According to the Chancellor of COOPA, Ifreke Nseowo, BBC stands to benefit greatly when it makes provision for Efik/Ibibio language service in its broadcast programmes.

He offered insight to the fact that Akwa Ibom State and Cross River State who speak the language are blessed with unique features that will give BBC rich news content.

Nseowo said BBC in return should create programmes in Efik/ Ibibio language as that will not only excite the people but will generate more listeners to BBC.

The Chancellor added “I can confidently tell you that you have a good market in Akwa Ibom State. Our State is monolithic in language. Everyone in the state and most parts of Cross River understand the Efik/Ibibio language.

“Moreover, the state is very media conscious. And we all know that nothing endears one more than his mother tongue. Thus, when you create BBC Efik/Ibibio language service just as you have created BBC pidgin and Hausa, you are invariably building more reach and value through your content. Don’t forget too that Ibibio is the fourth largest ethnic group in Nigeria.”

Nseowo who took out time to explain why Akwa Ibom State is worth projection through a media organization like BBC, said COOPA is ready to attract BBC to news items that may interest them in the State and also support them by sharing their reports.

He applauded the group over the the interest in BBC and their determination to maximize online presence to tell the story of the State.

Members of COOPA were shown round the facilities of BBC by the News Director, Idongesit Essien.

Previous: Nigerians In Canada Protest Against Buhari Government Over Insecurity
Next: Uniuyo Matriculates 7,198 Students ~ VC Charges Them On Submission To Authority