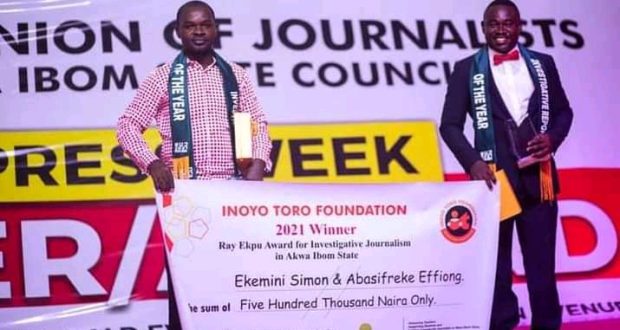 Journalists in Akwa Ibom End 2021 on a High

Two Journalists in Akwa Ibom State have emerged as the maiden winners of the Ray Ekpu Prize for Investigative Journalism and therefore ended the 2021 media calendar in the state on a high.

The announcement was made on Friday night as the high point of the Dinner Awards program to end the week-long Press Week of the Akwa Ibom State Council of the Nigerian Union of Journalists (NUJ) which started on Monday, 6th December.

The winners were announced by the Chairman of the screening committee of the Award, Mr. Nsikak Essien, erstwhile Editor of the defunct National Concord Newspaper and a Fellow of the Nigerian Guild of Editors.

Mr Essien, while presenting the winners, thanked Inoyo Toro Foundation which instituted the Award in honour of Ray Ekpu whom he described as ‘the poster boy in good journalism and the most decorated journalist from Akwa Ibom State’.

The Fellow, Nigerian Guild of Editors said his committee had called for entries from all ‘media genres’, except online media explaining that his committee wanted more information on their practioners from the state.

Mr Essien disclosed that at the close of entry, 18 submissions were received with 17 from the print media.
He highlighted the criteria used, to include: relevance of subject, authencity of investigative work, depth of investigation, presentation and language and impact on society and democracy.

The Screening Committee Chairman announced that the winning entry was a report written by Ekemini Simon and Abasifre Effiong which was published in the November 17 – 23 2020 edition of The Mail Newspaper.

The Award was presented by former President of the Senate of the Federal Republic of Nigeria, His Excellency, Ken Nnamani who was the Chairman of the Dinner and Awards hosted by the State Council of the Nigerian Union of Journalists, NUJ.

It could be recalled that the Ray Ekpu Award for Investigative Journalism was instituted by the immediate past Vice Chairman of ExxonMobil Companies in Nigeria who doubles as Advisor, Inoyo Toro Foundation on July 30, 2021 while delivering his remarks as the Special Guest of Honour during the Akwa Ibom State NUJ’s July, 2021 Congress.

While delivering his message entitled “Your Pen, Our Gain”on that occasion, Mr. Inoyo had noted that the award was instituted to encourage quality journalism in Akwa Ibom State and to celebrate one of Nigeria’s finest journalist and one-time World Editor of the Year.

Speaking on the occasion, the Governor of Akwa Ibom State, Mr Udom Emmanuel, represented by his Commissioner for Information and Strategy, Comrade Ini Ememobong congratulated the Award winners and observed that the winners of the Ray Ekpu Award for Investigative Journalism were lucky to be working as Investigative journalists in Akwa Ibom State. He pointed out that the entry which won them the Award was only possible because of the enabling environment provided for them to thrive by the state Government.

In their separate remarks, the Chairman, Nigeria Union of Journalists, Akwa Ibom State, Comrade Amos Etuk and the Planning Committee Chairman of the 2021 NUJ Week, Comrade Etoro-Obong Inyang congratulated all the winners, celebrated all the journalists, and commended all the supports received towards the success of the week-long endeavor.

Dignitaries at the event included Senator John Akpan Udoedeghe, Interim National Secretary of the All Progressive Party; Senator Ita Enang, Mr Eseme Eyibo, leaders of the Nigerian Union of Journalists, National Association of Women Journalists and others
.Note the reference to Me Inoyo