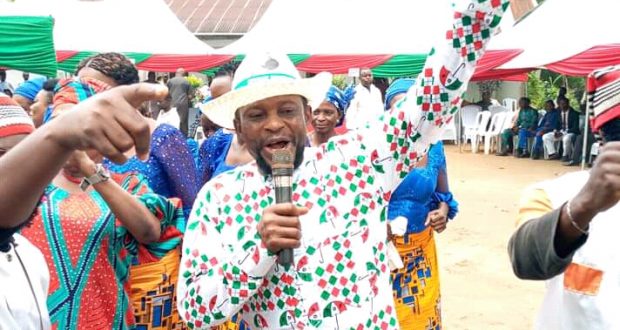 Emmanuel Sampson, Uyo .
It was a celebration galore, fill with ecstasies at Ndiya Usung Ikot Idaha ward 8 in Ikono local government Area, when the vice chairman of the council Otuekong (Dr) Idotenyin Etokobong host the local government on a thank you party to appreciate them for their massive support during the election.
The event which coincided with his birthday attracted people from all strata of life who came in their numbers to support their own, addressing the crowd, Barr. Godwin Umoh, the PDP State legal adviser said the celebration was not Hon. Idotenyin but that of the party, explained that the party have confidently won all the cases at the tribunal without further litigation, thanked the people for their massive support entrusted to their candidates before, during and after the election. The legal luminary maintaind that, PDP is the largest party in West Africa with men of proven integrity and outstanding leadership qualities and the will to lead the people at all times, commend Dr. Idotenyin for his magnanimity toward humanity described it as unprecedented in the history of Ikono.
In his words, the celebra, Hon. Etokobong express his unresverd appreciation for all and sundry who stood by him during the election ,noted that he have resolved to walk with Itoro columba lead administration in repositioning to a greater heights.

The vc explained that within the short time, God has use him in touching lives off of Ikono indigents by building a 3 bedroom flat bungalow for an aged woman, water projects at different locations and sponsoring of over 10 students studying in higher institutions across the state and many others.
He use the occasion to call on Ikono indigent in home and in diaspora to support to support in building egalitarian society for all, extend his hands of fellowship to opposition party to also support in all aspects in order for business to thrive.
The supper performing chairman, donate cash, and various items to his people. Amoung dignitaries that grace the occasion was the chairman of Ikono, Hon. Itoro Culumba, PDP chapter chairman, Barr. Moses Akpan, forum of vice chairman led by Hon. Udeme Emmanuel of Uyo local government and former and present leaders of the party as well as women and youth groups.

Previous: The former Secretary to the Government of the Federation (SSG), Ufot Ekaette, is dead.
Next: Write With Wisdom, Nsima, Akpabio And Udom Have Made It In Life ~ Arc Nya-Etok Advised journalists