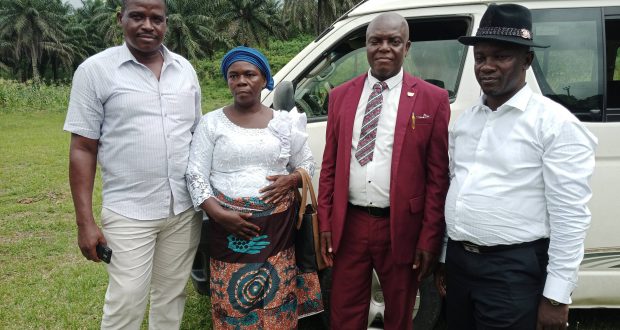 It was a day of celebrating a living legend and icon who has labored and still laboring immeasurably for the expansion of God’s kingdom as family members, worshippers, friends, colleagues and well wishers thronged the Church auditorium to witness and celebrate their own, Evangelist O.A. Sampson at the send-forth service organized by the Church of Christ, Ikot Effiong Otop Okoyong, Odukpani local government Area.

While delivering the welcome address the Church Secretary, Bro. Olusegun Kokiera said the programme was carefully planned to celebrate Minister Sampson who worked tirelessly for the expansion of the gospel in Ikot Effiong Otop and beyond.

He said COC in the entire Odukpani was blessed to have him as the Preacher, noting that the living legend, Evang. O. A. Sampson is worthy of emulation, describing him as an achiever, Bible encyclopedia and a father indeed.

He further stated that Evang. Sampson throughout his tenure proved himself as a minister of God of proven integrity, illustrious advocate of holiness,true ambassador of Christ as well as a defender of the spiritual legacies of the fathers.

In his Preaching, Min. M. B. Archibong of the Church of Christ, Okurikang Okoyong, enjoined Christians to learned how to honour and reward those who have sacrifice in God’s vineyard.

Archibong who stressed that as disciples of Christ,we should not look back in serving God, while drawing his text from the book of Luke 7:3-8, charged Christians to be generous. The renowned Cleric thanked Min. Sampson for keeping the faith, also appreciate the church for remembering his good works during his stayed.

Evangelist Sampson which served the congregation diligently with remarkable footprint from 1996 to 2011, converted many souls, construct and completed the magnificent worship Hall,as well as helped in the formation of Preacher/teachers Forum now Odukpani Gospel Forum in 1997, and establishment of additional four congregations in Odukpani LGA.

In his response, Min. Sampson thank the church for the honored done to him, prayed for God’s divine protection upong all members even as he promised to keep the Church and body of Christ unified.

The well attended celebration which was held on Sunday, June 26th 2022, at the church worship Hall, also had Evangelist Effiong Benson Andu who was equally send off.