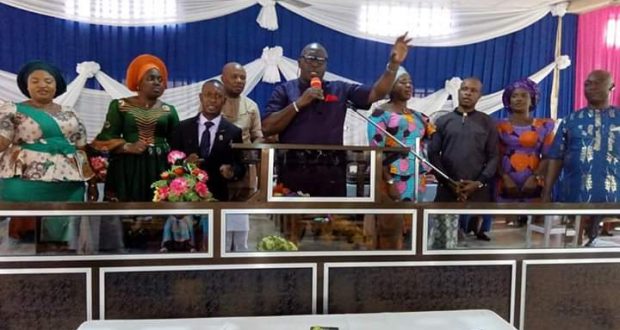 A Clergy of the Apostolic Church Nigeria, Apostle Okon U. Okon, has charged the newly elected Chairman of the Nigeria Union of Journalists (NUJ), Akwa Ibom State Council, Comrade Amos Etuk to do everything possible to reposition the union for the best before he leaves office, so as to justify the confidence repose on him by journalists who voted him into office.

Apostle Okon said this on Sunday in his sermon at the Apostolic Church, Ikot Annung District Headquarters, Ibesikpo Asutan local government area, where the Consolidated Chapel of NUJ worshipped in a thanksgiving service in honour of the NUJ Chairman who is a member of the chapel.

Reading from 1st Kings 18 :25 – 36 and preaching on the theme “REPOSITIONING THE UNION FOR THE BEST”, the Clergyman who emphasised on 1st kings 18 vs 30, maintained that Comrade Etuk will be able to reach any height in life if he will oblige to the directives of God which is to reposition the NUJ for the best, not forgetting to steadfastly pay attention to the welfare of members which he said was very paramount.

Referencing the biblical Elijah and the defeat of prophets of baal, the preacher recalled that Elijah was able to succeed because he carried the representatives of the twelve tribes of Israel which was represented by the twelve stones.

In the same vein, he charged the NUJ chairman to work in conjunction with all the chapels of the union in the state to succeed.

Apostle Okon urged the Chairman to operate a prayerful Exco and avoid familiar prophets who will prophesy doom for the union or those false prophets that are after ‘stomach infrastructure.’

He also emphasized on the neutrality, objectivity and truthfulness of the media for the benefit of government and the masses, with no preferential treatment to any quarters.

They maintained that the choice of the church for the thanksgiving was sequel to the fact that the prophecy from the church that Amos Etuk will emerged the chairman of NUJ has been fulfilled, hence the need to return immediately in thanksgiving.

In his thanksgiving speech, Comrade Amos Etuk described his emergence as Chairman
of the union at the August 2, 2019 NUJ election
as a fulfilment of God’s prophecy and pledged to move the union to greater heights not forgetting the welfare of members of the union.

The NUJ boss thanked the church for their prayers and sued for cooperation among members of his Exco and the entire members of the NUJ in the state in order for him to succeed.

Other highlights of the thanksgiving service included, prayer for the new NUJ Exco, the entire NUJ in the state, government in the state and the Federal level as well.

Previous: NUJ To Partner Udom National Under 17 tournament
Next: ERA OF CRYING, SUFFERING IS OVER IN NIGER DELTA —Akpabio.