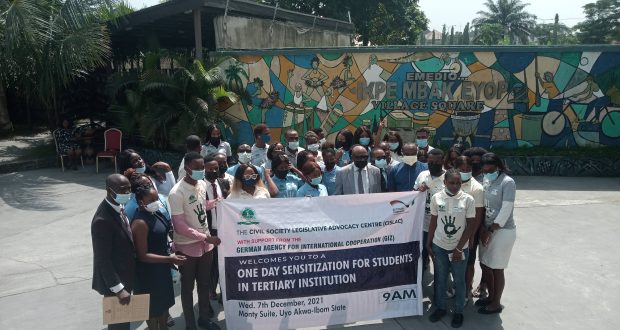 CISLAC Moves Against Sexual Exploitation And Abuse in A’Ibom

Disturbed by the rising cases of sexual exploitation in the country, a non-governmental organisation, Civil Society Legislative Advocacy Centre (CISLAC) in partnership with Independent Correct Practices and Other Related Offense Commission (ICPC),has Kick Against sexual exploitation as a form of corruption, that should be checkmate and perpetuators deal with in accordant with the law.

Addressing participants at Monty Suits hotel in Uyo, on Tuesday, December 7, Bathsheba Tagwai team lead of CISLAC harped on adequate protection for young people against sexual exploitation and the need to speak out to serve others.

Tagwai explained that the sensitization programme was embarked upon to educate students in tertiary institutions, who are the most vulnerable of the abuse, she noted that the sensitization is a step in the right direction as it would help to educate young girls on their rights and the available help platforms established for complaints, counselling, therapy and referrals for emotional health of victims.

Speaking during the programme, Mr. Emmanuel Ebu, a member of German Cooperation showed the students step-by-step workings of how to use the TIMBY App which, according to him, is an online base application, divided into three section, “The legal support, the metal and the outreach.”

Presenting his welcome address, Mr. Auwal Ibrahim Musa, the Executive Director of CISLAC, said most citizens are not aware of their fundamental human rights hence the sensitization to stamp out the ill from the society.

Represented by member of CISLAC Board of Trustees, Hajia Hadiza Kangiwa, the Executive Director said the collaboration with ICPC is timely as it would help people learn their voices on all forms of sexual harassment,(sextortion).

“CISLAC has created a trusted electronic channel which is called TIMBY App and physical complaint and reporting channels for people to pursue psychological support and redress. This is in line with one of the Nigeria’s commitment under Open Governance Partnership (OGP), to support victims and witnesses of corrupt practices.”

“The Nigerian universities in particular are considered as extremely abusive onwards young women seeking education; this does not negate the fact that there are also young men who experience such abuses/ harassment. So, the stereotype by society that females are the only victims of sextortion should be reconsidered because there are situations even though not so prevalent where males have been victims. Also, there are situations where the female students are the ones who approach the lecturers and offer sex in exchange for favors.” She submitted.

The well attended serminar, had selected students, from the University of Uyo, Akwa Ibom state college of Education, Afaha Nsit and others from Metropolitan polytechnic,Uyo who where taught on “Sexual exploitation in Nigeria Universities a form of corruption, what the ICPC has done so far and the way forward for stakeholders.” and the “Importance of psychological support for victims of sexual harassment and for schools to have internal mechanism to handle issues of sextortion-WARD C.”

All speakers at the event spoke extensively on various sexual abuse’s, charged the attendees to speak out when ever issues arises and be watchful of the predators in the society.