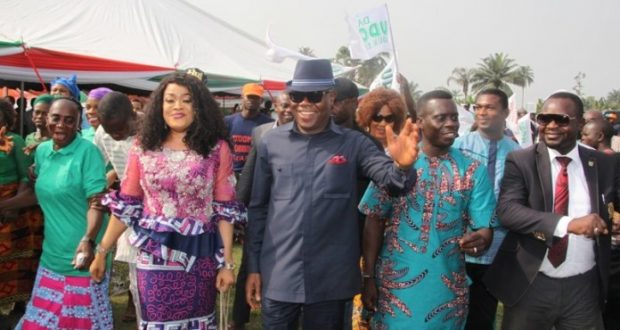 In the spirit of Christmas and effort targeted at boosting bonding among the people of Itu Local Government Area and to enhance their participation in governance of the state, the Akwa Ibom State Commissioner for Housing and Special Duties, Mr. Akan Okon, and his wife, Queen, showered the people with financial support, bags of rice, vegetable, clothing and other gift items.
The gesture, which was to compliment the development and empowerment efforts of Governor Udom Emmanuel and that of his wife’s pet project, Family Empowerment and Youth Re-Orientation Programme (FEYReP), has become a routine by the Commissioner and his wife. Mr. Okon, who said the event was made possible because of the peaceable nature of the people of the area, said “In Itu Local Government Area, we are peace loving people. We are working together in unity. When it comes to political activities, we make sure everybody is consulted and carried along. This is evident in the turnout of people at the event today. You can see it for yourself. Our major concern now is to make sure we return Governor Udom Emmanuel to office for a second term in 2019.”
At the event, where the essence of sharing and selfless giving was demonstrated at Mbiatok Primary School Ground, the Commissioner’s wife, Queen, also doled out Christmas gifts in monetary and material items to women of the area and urged beneficiaries to replicate same gesture to the needy around them.
Mr. Okon, who ensured the distribution of the items were made to youths, women and elders in the 10 Wards of the Local Government Area as well as the less privileged, tasked the people to continue in their dedication, commitment and support to the Udom Emmanuel-led administration for more democratic dividends.
The event, which had in attendance the member representing Itu/Ibiono Ibom in the House of Representatives, Dr Henry Archibong; Commissioner for Finance, Mr. Linus Nkan; Akwa Ibom State Secretary of the Peoples’ Democratic Party (PDP), Mr. Harrison Ekpo; Senator Anietie Okon; Obonganwan Grace Ekong; Harrison Harry; Chairman of Itu Local Government Council, Barrister Etetim Onuk; Vice Chairman of Uyo Local Government Council, Emmanuel Ukai; that of Itu, Mrs. Emem Ekpanya; former representatives of the area in the State House of Assembly, Barrister Kennedy Ekong and Dr Ekaette Ebong-Okon; the Paramount Ruler of Itu, Edidem Edet Akpan Inyang, among others, featured popular artistes and comedians.