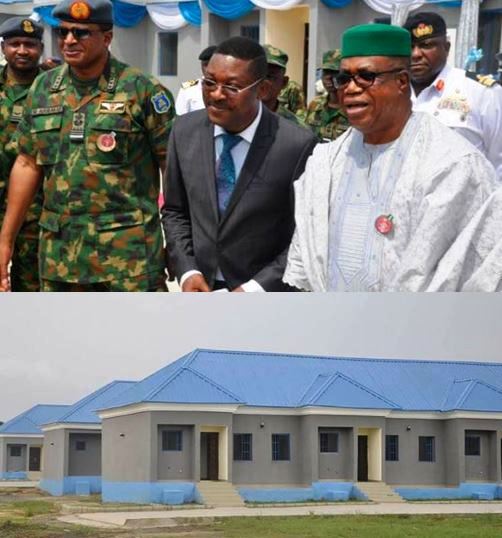 The CAS who commissioned 3 blocks of newly constructed one bedroom transit accommodation for it’s personnels serving at the NAF Base in Calabar said the visit was essentially to inspect operational facilities, identify challenges and commission recently completed projects.

He added that the commissioning of the buildings is in furtherance of the current NAF leadership’s determination to eliminate the challenge of insufficient accommodation as well as provide befitting housing for NAF personnel.

In his remarks at the commissioning ceremony, the CAS noted that the insufficiency of personnel accommodation within the barracks had affected NAF operations.

According to him, “the provision of accommodation for personnel in dispersed locations has had negative implications on regimentation, security and the ability to rapidly deploy personnel at short notice.

The Governor of Cross River, Senator Ben Ayade who was represented by his Deputy, Professor Ivara Esu commended the personnel of the NAF deployed to the State saying they have been conducting themselves well.

He then reiterated the readiness of the State Government to continue to support the Unit in every possible way.

Also speaking at the commissioning, a former CAS, Retired Air Marshal Nsikak Eduok, said that he had been observing the highly commendable efforts of Air Marshal Abubakar in providing accommodation for personnel at NAF Bases all over the country. He therefore advised him to sustain his excellent performance.

Air Marshal Eduok also thanked President Muhammadu Buhari for the provision of resources to cater for the welfare of personnel while praising the CAS for judiciously utilizing appropriated funds. He then enjoined all NAF personnel to reciprocate the president’s kind gesture by continuing to do well in the onerous task of defending the nation’s territorial integrity.

Previous: We Are Not Aware If Enyimba Will Use Calabar Stadium – Cross River Government
Next: 8 Suspects Arrested For Alleged Murder Of Police Inspector For Ritual