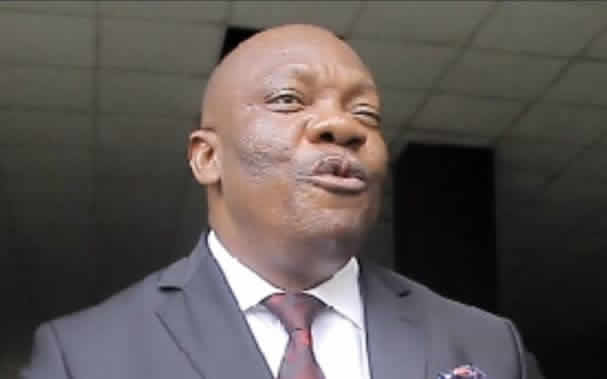 Call to Service is a Challenging Assignment – Ekong Sampson

Barr. Ekong Sampson, a commissioner designate soon to be sworn into the Akwa Ibom State Executive Council by the State Governor, Mr. Udom Emmanuel, has said that being nominated to serve the state is challenge on the nominee.

Barr. Sampson said this while fielding questions from newsmen at the House of Assembly premises in Uyo, shortly after his confirmation by the 7th House of Aseembly during its plenary on Thursday.

According to the Mkpat Enin born lawyer, it is only a privilege that one is being chosen among millions of othere to serve the state and that such call for service should be seen as a challenge, considering that the nominee will have to be working around the clock to prove his worth and capacity to the watching eyes of the public and must justify the mandate so given to him.

His words: “I feel elated though, but I am more challenged. It is always a thing of pride to be called upon to serve the state in whatever capacity and I am grateful to our Governor for finding me and my colleagues fit amongst millions of Akwa Ibom people. As much as it is a delightful thing, it is notably a challenging assignment because where we were good, we are expected to be better.

“We trust that we will build upon foundations and advance governance. We have a government that is very focused and committed to making life better for Akwa Ibom and her people. We have a government that is ably led by an innovator in Governor Udom Emmanuel. Therefore as a team, we trust that we will be able to justify the confidence reposed in us. When asked about his readiness to take up a more challenging designation as may be decided by the governor, the immediate past Economic Development Commissioner said: “In my days in the legislature as chairman of committee on judiciary and human rights, I usually said that the state governor is like a manager of a football team who decides who features where. I cannot speculate but wherever I am sent, I will serve the state within the best of my ability. Being selected into the state EXCO means you should be able to feature anywhere. You’re expected to be vast in knowledge because you’re there to assist the captain of the ship in all possible ways to deliver on his promises to Akwa Ibom people.

“All I can say is that I look forward to a partnership that will take Akwa Ibom state to greater heights. Myself and my colleagues have no duty to choose where to be sent, all we should do is reflect on our opportunities and put in efforts to deliver for the collective betterment of the people.”

Taking his turn of questions, the Leader of Legislature in the area, Hon. Christian Jumbo who joined others in a show of solidarity to the nominee, expressed gratitude to the governor for giving Mkpat Enin another privilege of having a representative in the state exco. He hinted that as leader of the legislature in the area who is always mixing with the grassroots on a daily basis, he could authoritatively say that there has been excitement in the land since the list of exco nominees went public.

“As a person, the nominee from Mkpat Enin, Barr. Ekong Sampson is one man we are always proud of. Personally, I often refer to him as an encyclopedia because his knowledge and political wisdom is wide. So I and of course, Mkpat Enin people have no doubt that as always, he will do us, the governor and the state prouder this time. And let me add that by returning all members of the EXCO that finished his first term with him, the governor has made history and has shown his belief in continuity and experience”, Jumbo added.

Several others who spoke also took turns with different words of gratitude to the governor for putting Mkpat Enin in his first thoughts, as he launches his second term. They include, the Council Vice Chairman, Hon. Anietie Okodi, Leader of the Youth Council in the Area, Comrade Emem Alex, immediate past Vice Chairman, Mrs Eno Williams, Mr. Edet Albert who spoke for the Divine Mandate Ward Coordinators in Mkpat Enin, among others including a woman leader in the area who reminded that the women in the area were consistent and were never involved in all the anti party activities that were flying.

“We supported him to deliver the governor and the party because he was always coming home to report progress. We pray and hope the governor listens to the cries of Mkpat Enin people, especially in Ikpa Ikono through him to give us access road”, she added.

Rounding off the session, the Head of Ikpa Ikono clan, HRH, Obong Archibong Umana called for unity in the area. He charged all from the area in one leadership position or the other to always seek the interest and unity of Mkpat Enin first, while also noting that having been who the governor prefers to take from the area, it is the duty of all progress meaning indigenes of the area to unite and support the Commissioner Designate, rather than stoke fire of crisis that will distract him from his official duties and possibly stall developmental gestures of government from getting to the area.