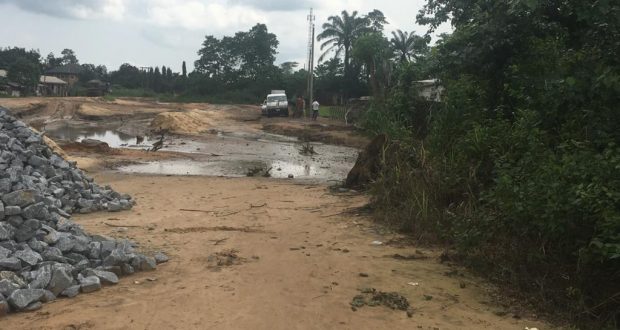 A former Deputy Speaker of the Akwa Ibom State House of Assembly, Rt Hon Uwem Udoma, has called on Governor Udom Emmanuel to lead a State delegation to meet with President Muhammadu Buhari on the poor state of the Calabar Itu highway and quickly explore the option of the Road Infrastructure Development and Refurbishment Investment Tax Credit Scheme by collaborating with AKIPOC, Mobil, CCECE and other major construction companies operating in the state towards fixing the road for the benefit of Akwa Ibom people.

Udoma who spoke to newsmen in Uyo on the poor state of the road and the Ikot Ekpene, Aba Highway, advised the Governor not to wait any longer but rise up and lead a delegation of his entire Exco, The members of AKHA, members of National Assembly from Akwa Ibom, Akwa Ibom State Council of Chiefs, Senior Citizens and Elder Statesmen on a courtesy call on President Muhammadu Buhari to explore ways of seeking alternative means of funding the reconstruction of Calabar Itu highway and Ikot Ekpene Aba Highway, saying the move becomes imperative as the poor state of the road affects Akwa Ibom people irrespective of political party.

“The time has come for Governor Udom Emmanuel to think creatively and explore the concept of the Road Infrastructure Development and Refurbishment Investment Tax Credit Scheme like the Federal Government, some states and private companies are doing towards fixing these roads”.

“Calabar Itu highway was initially designed in 1975 by the Murtala Muhammed regime as a Dual Carriage Way but was changed in 1976 to a Single Carriage Way by Gen Olusegun Obasanjo after the death of Gen Murtala. From then till now, the road is about 40 years old and has outlived it’s usefulness and therefore needs urgent redesigning, remodelling and reconstruction for the benefit of Akwa Ibom people”.

He observed with regret that Akwa Ibom leaders have failed it’s people by not rising above board, beyond party sentiments to get the roads fixed, stating that it is a thing of shame that both PDP and APC have all failed to fix the roads in the 16 years and 6 years they have both been in power respectively.

According to the former Deputy Speaker, Akwa Ibom people, more than Cross Riverians, are the greatest users and beneficiaries of Calabar Itu highway as almost all our civil engineering materials and all concrete components of all major construction jobs by government, construction companies, private individuals, schools, estates etc come from both Unicem cement and the quarry at Akampa in Cross River State and in this era of insecurity caused by kidnapping and banditry especially in the South East geopolitical zone, road remains the safest land route to Abuja from Akwa Ibom through Ikom.

He regretted that heavy duty vehicles carrying cement ply the road which explains why the price of cement is on the rise in the state and that another reason why Calabar Itu highway is a very important he said, is that almost all agricultural produce from Northern Cross River and from the Northern part of the country to Akwa Ibom State passes through the road, which makes it imperative for the State government to in the interim, fix the axis from the Itu head bridge to Itam, a project he noted can be completed within two years of which the federal government will surely make refunds as was the case with the other Trunk A roads like the Abak-Ikot Ekpene road and others which the federal government refunded #78 billion to the coffers of the Akwa Ibom State Government.

Udoma reminded the Governor that the issue of Calabar Itu highway is more than a party affair hence the need for him to rise above politics and facilitate the mobilisation of PDP, APC, Fathers of Faith, Sons of Faith, CAN, and every relevant stakeholder towards achieving results in the two years left, stating that Ikot Ekpene to Odukpani is about 118 kilometers which if reconstructed will benefit business men and women, entrepreneurs, commuters and help stimulate economic growth and development of the state.

He noted that though Akwa Ibom can boast of an airport where people can fly in and out at anytime, flights cannot carry cement and stones needed for construction purposes, a job he says can only be ferried by heavy duty vehicles plying the road.

He observed that Senator Ita Enang is the only individual who has been struggling alone to get the road fixed and only succeeded as an individual to get a paltry #54 billion contract for 20 kilometers portion of the about 118km road, pleading that the Governor and every stakeholder in Akwa Ibom must join hands to make the dream of having a reconstructed Calabar Itu and Ikot Ekpene Aba Highways fixed as the severity of the issue and the socioeconomic impact of the roads on the state’s economy is not something to be left to one individual, especially when both federal and state governments have less than two years for their tenure to end.

It could be recalled that President Muhammadu Buhari on 25 January 2019, signed the Executive Order No. 007 on Road Infrastructure Development and Refurbishment Investment Tax Credit Scheme.
The Scheme is a public-private partnership (PPP) intervention that enables the Nigerian Government to leverage private sector capital and efficiency for the construction, repair, and maintenance of critical road infrastructure in key economic areas in Nigeria.
It is open to any Nigerian company (other than sole corporations), acting on its own or in collaboration with other Nigerian companies, and institutional investors wishing to construct or repair any road identified and designated by the Government as an “eligible road” under the Scheme.

Participants are entitled to utilize the total cost (Project Cost), incurred in the construction or refurbishment of an eligible road as a tax credit against their future Companies Income Tax (CIT) liability, until full cost recovery is achieved. As a further incentive, Participants will be granted a single non-taxable uplift. The Uplift will be a percentage of the Project Cost, and the percentage to be applied is Monetary Policy Rate plus 2% on Project Cost. The uplift will be included in the total tax credit available to each participant.