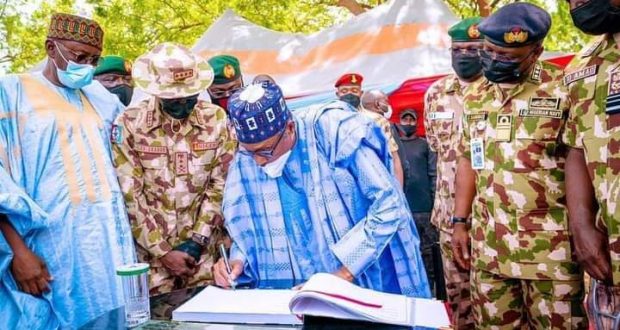 President Muhammadu Buhari has approved the establishment of two new University of Technology for Jigawa and Akwa Ibom States.

The President also approved a take-off grant of N4 billion each for the Universities of Technology from the funding resources of TETFund to ensure early take-off of the institutions.

The Permanent Secretary at the Federal Ministry of Education, Sonny Echono who disclosed this on Monday in Abuja said the president approved that four existing Universities of Technology loca,ted in Yola, Akure, Owerri and Minna be upgraded and equipped.

The Permanent Secretary said the specialized Universities would lay a solid foundation for building national preparedness and resilience in anticipation of future challenges in the health sector while reducing medical tourism to countries like India, UAE, Egypt, Europe and the USA.

While noting that the presidents had promised to establish an apex National Institute of Technology (NIT) in Abuja with six Satellite Universities of Technology, one in each geo-political zone of the country, he said the objective is to stimulate rapid technological transformation of the country.

“The Institute shall be patterned after similar institutions in Singapore and Malaysia to serve essentially as a postgraduate centre devoted to research and innovation, drawing the best graduates from the six Universities of Technology, as well as other exceptional graduates from reputable universities within and outside Nigeria,” he said.

He however noted that the Federal Ministry of Education will collaborate with the Federal Ministries of Health, Science and Technology, Communications and Digital Economy, the FCT Administration as well as other relevant agencies and Institutions to facilitate speedy actualization of these Projects.

Meanwhile, the Permanent Secretary also hinted to journalists that the president has also approved new chancellors for all universities in the country and that the details will be made available in due course.