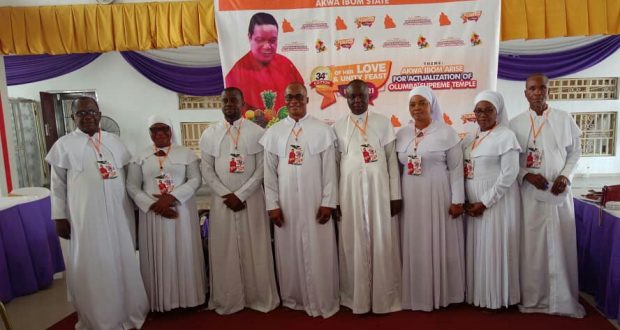 …call on government to involve God in governance

The Brotherhood of the Cross and Star has concluded plans to begin the 34th Edition of Love and Unity feast, tagged Uyo2021.

Briefing journalists in Uyo, on Monday 3rd, May 2021 on programmes line up for the spiritual convention, Chairman of the Planning Committee, Christ Ambassador Godwin Edem said the epochal celebration is to consolidate on peace and Unity we have enjoy in Akwa Ibom state. He disclosed that the Theme for this year’s celebration is “Akwa Ibom Arises For Actualization Of Olumba Supreme Temple”

He explained that, Spiritual Leader of Brotherhood of the Cross and Star (BCS) His Holiness Olumba Olumba Obu is the one who has sustain the peace and Unity in the world, therefore should be celebrated.

“These feast is the 34th edition, it has been celebrated before the creation of Akwa Ibom State. We are gathering as righteous and religious people, known worldwide, as peace loving people. The crisis experience in the country to day is because, our leaders has refuse to allow God take charge in governance. Brotherhood mean togetherness. I call on Nigerians and their leaders to embrace unity, peace and love amongst themselves so as to restore the confidence of our founding fathers.”

The committee Chairman maintained that with unity the country will consolidate on her greatness, and can dictate the pace for others to follow.

Ambassador Edem who described Olumba Olumba Obu as the King of kings and Lord of lords said as an ardent believe, Akwa Ibom State and indeed Nigeria should practically emphasise love, peace, unity and forgiveness amongst themselves.

While giving insight to the religion organization, the State Administrator of the Church, an Archbishop, Hon. Justice Archibong Archibong said Olumba Supreme Temple can never be destroy, noted that the church use the feast to appeal and pray for continue peace in the state. “The love of God for the state is greater, when you have love, unity and peace God will raise you higher and peace will flow effortlessly to make you a world leader.”

He said that, the celebration over the years has brought peace and promotion to our dear state and country. Justice Archibong affirm the efficacy of the feast, said the Father has used the annual religious conference to prosper and unite the state, as Akwa Ibom is inarguably one of the most peaceful states in Nigeria even though its made up of different tribes and tongues.

On his part, Christ Ambassador Amah Williams, also hinted that Olumba Olumba Obu is the only Spiritual Leader in human history that has been able to reveal the Glory of the Father. The event which began on Monday 3rd May, will run to Sunday 9 May, 2021 is held at the Brotherhood of the Cross and Star Abak road, will feature the following activities; Empowerment, Evangelism for soul winning, Seminar for men and women, football match, indoor games, fasting and prayers as well as food exhibition among others.

Among those present at the media briefing where; Brid Gene, Solomon David, Bishop Enobong Udom, Her Eminence Emem Essien amongst others.

Previous: HIV/AIDS Prevention: NGOs urges Govt to partner media on sensitisation
Next: PANDEF Mourns Late Sen. Etang Umoyo …described him as an icon of no mean repute who lived an upright life