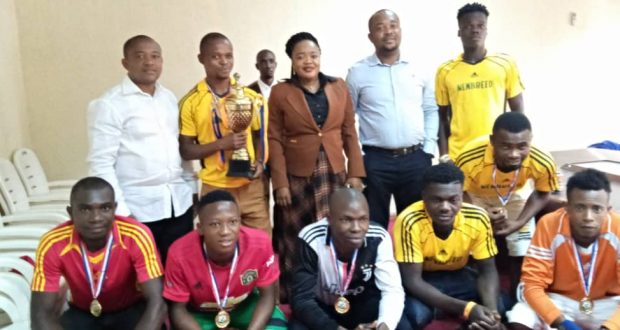 As a streak of assurance to the fading saying that “Youths are the leaders of tomorrow”, Akwa Ibom youths have been advised to tighten their loose belts preparatory for leadership roles in the nearest future, as preparation can only meets opportunities, nowadays.

The advocacy was made on Tuesday by the Member representing Ukanafun in the Akwa Ibom State House of Assembly, Dr. Charity Ido, when a delegation of Southern Ukanafun Ward “3” Soccer Team presented the trophy they won at last year’s edition of Newbreed Football Tournament held in the local government area, as a mark of honour to her.

The legislative Amazon and Chairman of the Assembly Committee on Public Accounts, further stated that youths must be proactive and develop their capacity in readiness to take over power from the elderly, as elders would soon phase out for them to take up the mantle of leadership.

While commending the Ward “3” Soccer team for the beautiful display of talent and showmanship in the round leather game challenge, the erudite member of parliament charged them to brace up for more wins in the upcoming years, noting that the gesture gave her and the political clan a rare sense of pride and reassurances that something good could come from “Nazareth”.

She, however, admonished the team as well as the entire youths of the constituency to inculcate the habit of humility, hardwork and peaceful coexistence which the tournament espouses, noting that, “there’s a high degree of love and unity in the game of soccer, which must be replicated in the game of politics”.

The former Chairperson of the state’s Technical Schools Board used the occasion to express her resolve to contribute towards making the constituency GREAT AGAIN!

Previous: University workers set to go on strike
Next: GODDY UMOH: Carving a Niche in the Service of PDP